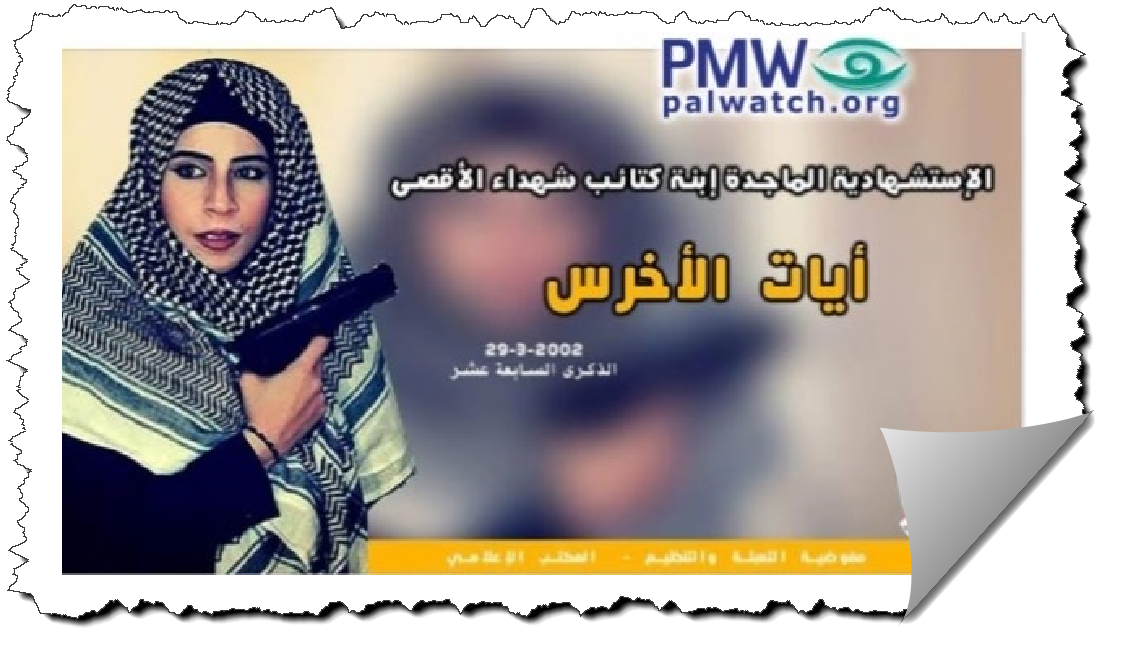 Palestinian Media Watch (PMW) has released a special report on how Fatah uses Facebook to promote terrorism against Israel – without Facebook intervening.

Fatah will also continue to use Facebook in 2019 to glorify terrorism against Israel, the PMW writes in its report.

In the image below, Fatah glorified 17-year-old suicide bomber Ayyat Al-Akhras as “magnificent”:

“The self-sacrificing warrior Ayyat Al-Akhras… jumped himself into a shopping mall for the Zionists” – “A magnificent martyrdom seeker.”
(Fatah’s Facebook page, 28 March, 2019)

Fatah repeatedly posted pictures of 19-year-old killer Omar Abu Laila on Facebook in the weeks after he murdered 2 Israelis on March 17, 2019.

“Omar, you are not dead… we follow in your footsteps.”
(Fatah’s Facebook page, two weeks after the killings, March 30, 2019)

In the PMWs report Fatah-Facebook Terror Promotion Partnership 2019 , PMW documents that Facebook continues to allow Fatah to use its Facebook page as a tool to promote their terrorist mission. Fatah uses Facebook as an important tool to support and promote terrorism in real time, and to honor the most notorious killers in Palestinian terrorist history. Palestinians who murdered Israeli civilians in 2018 and 2019 were glorified by Fatah on their Facebook page along with former Palestinian mass murderers, whom Fatah presented as Palestinian “legends”.

A striking example is the post Fatah chose to open the new year with – January 1, 2019. In the post, Fatah glorified 13 deadly terrorist attacks and terrorists who had been behind various types of terrorist attacks: hijacking, bus hijacking, hostage-taking at a hotel, several shootings, two suicide bombings and several terrorist planners.

Fatah wrote in the post:
“Fatah went through (ie was by)… the ruins of the Savoy Hotel (hostage-taking, where 11 were murdered) and in the deep sea with Dalal [Mughrabi] (where 37 was murdered, 12 of them were children), was in the air on the hijacked plane in 1972, ”and so the post continues … After Fatah’s review of past terrorist attacks, the post ends with Fatah’s emphasis that they continue to support terror. Fatah’s explicit message to the Palestinians on Facebook in early 2019 underscores that all the terror they have mentioned in the post continues and that terror remains an integral part of their mission.

Another example of Fatah’s continued terrorist support is their glorification of the terrorist Ahmed Nasr Jarrar – who murdered a father of six in a drive-by shooting. On the one-year anniversary of his attack, Fatah hailed him as: “the ideal example of humanity,” “the crown jewel,” “the magnificent,” and “the star of the night leading those who wander.” (d. 6 February 2019). Facebook is used by Fatah to demonstrate that the path from anonymity to being a Palestinian hero and role model is terror. Jarrar received this incredible recognition on Facebook from Fatah because he had murdered an Israeli.

The latest Palestinian killer glorified by Fatah in 2019 is Omar Abu Laila. In just two weeks, Fatah managed to advance Abu Laila from being an unknown Palestinian teenager to a Palestinian role model. Abu Laila murdered 2 Israelis, one of whom was the father of 12 children, on March 17, 2019. Two days later, Abu Laila was shot and killed by Israeli soldiers as he opposed arrest. Fatah then used Facebook continuously for several weeks to pay tribute to Abu Laila, assuring the killer the status of a new Palestinian idol.

The day he was killed, pictures of Abu Laila already adorned Fatah’s Facebook page with lyrics praising him as “heroic martyr Omar Abu Laila.” Like the killer Ahmed Jarrar (mentioned above), who was called “the ideal example”, Abu Laila was christened “the perfect human being.” Next, Fatah’s Vice President Mahmoud Al-Aloul publicly declared the killer Abu Laila as the new role model for the youth: “We are extremely proud, this is Omar Abu Laila… he represents you all, represents all young Palestinians.” It was also posted on Fatah’s Facebook page.

Then a Palestinian municipality named a street and a square after the killer. Fatah posted it on Facebook along with a picture of the agreement and the signatures of each of the municipality’s members (March 24, 2019).

A few days later, Fatah’s Facebook followers saw a monument adorned with the terrorist’s picture, and Fatah the logo declared him a “martyr.” Fatah then sent a speech from a demonstration in which the Palestinians were told to see Abu Laila’s attack as a model for the futureor: “We follow in your footsteps.” (March 30, 2019). Less than two weeks after Abu Laila’s terrorist attack, Facebook had provided Fatah with a platform to transform Abu Laila into a national symbol and reiterate to the Palestinians that killing Israelis remains Fatah’s mission.

Fatah’s use of terrorists as role models continues. In May, Fatah used Facebook to show Fatah leaders holding a Ramadan fast-breaking dinner in honor “for the soul of Martyr Omar Abu Laila,” and in a speech in June, Fatah Vice President Al-Aloul announced that: “There are thousands of Omar Abu Laila. ”

Fatah’s historical terrorist was also repeatedly honored on Facebook in the first half of 2019. Abu Jihad, who is responsible for the murder of 125 Israelis, was honored as “the prince of the martyr” and “roaring lion”. Dalal Mughrabi, who was behind the murder of 37 Israelis, was presented as: “a guy for generations”. Ali Hassan Salameh, who was behind the planning of the Olympic attack in Munich in 1972, in which 11 Israeli athletes were murdered, was hailed as: “heroic commander” and “legend”.

Facebook Continues Cooperation with Fatah and Tribute to Terror
In early 2019, PMW sent a report to senior Facebook officials documenting Fatah’s terrorist promotion on Facebook during 2018.

PMW’s director Itamar Marcus had a conversation with the director of Facebook’s global counter-terrorism team. Marcus explained to Facebook that their acceptance of Fatah’s use of their platform to promote terrorism literally puts the lives of innocent people at risk.

Despite this, Facebook has chosen to continue to be a piece of Fatah’s terror machine in violation of its own rules: “We [Facebook] do not allow organizations or individuals who declare a violent mission or engage in violence , has access to Facebook. ” (Community Standards).

Fatah continues to use Facebook to “preach a violent mission”; Not only does Fatah not deny that they are “involved in violence,” they openly use Facebook to celebrate their involvement in violence. Every time Fatah posts a new post on Facebook that encourages violence or pays homage to murderers as role models, hundreds of thousands of Palestinians get more motivation to kill Israelis.

As early as 2005, the UN Security Council warned of the link between glorified terrorism and terrorist attacks. At the time, the Council unanimously adopted Resolution 1624, which states, among other things, that “the UN strongly condemns incitement to terrorist acts and rejects attempts to justify or glorify terrorist acts that may lead to further terrorist acts.”

According to PMW, Fatah’s glorification and terror took place in 2018 on Facebook without Facebook’s knowledge. From PMW’s latest report, it is clear that Facebook will also be Fatah’s willing “partner” in 2019. Therefore, Infinitum News, together with PMW, reiterates the demand that Facebook close Fatah’s Facebook page immediately and permanently.

The terrorist threat against Israel on social media Фатах

Fatah on Facebook: On the anniversary of the Yom Kippur War, the Arab world is called upon to go to war against Israel again