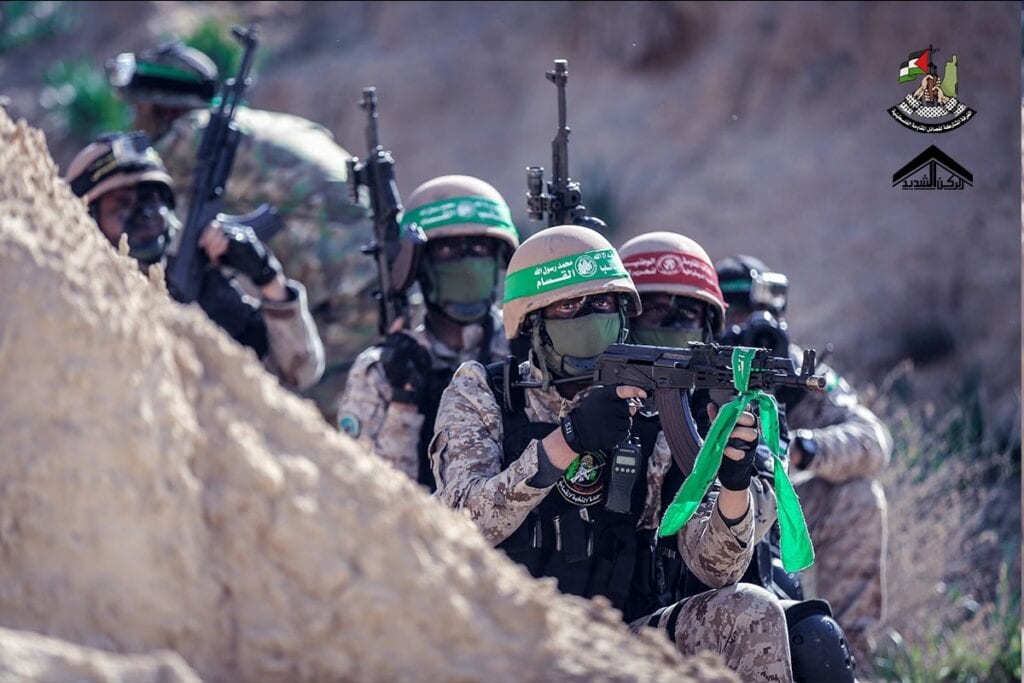 While Israel examined by the International Criminal Court (ICC) for war crimes in Gaza, the Hamas, which has had control of the Gaza Strip since 2007, breathe relieved not to be made responsible for their terrorist attacks and rocket attacks against Israelis or for Using the civilian population in Gaza as human shield.

The Oslo agreements left a number of issues that had to be settled in future negotiations between PLO and Israel, including Jerusalem, settlements, Palestinian refugees and borders. Therefore, it would be impossible to recognize a “Palestine”, which includes all areas that came under Israeli control in 1967.

The prosecutor’s desire to clarify “borders” for “State Palestine” based on what The Palestinians call the “1967 border” are defective and misleading. The so-called “1967 limits” are ceasefire lines from 1949. Israel was willing to accept these lines as limits, but it was rejected by the Arab countries and therefore remained ceasefire- Lines until other ceasefire lines after the war in 1967.

«I do not find that the majority approaches or have arrived with an appropriate argument in their answer to the questions presented for the Salen, and in my opinion, they have no legal basis underholders, and even less under international law” , writes Kovács in what cannot be interpreted as other than an extremely strong disagreement.

Nevertheless, ICC has decided to proceed with the study of Israel.

ICC investigates Israel, despite the fact that Israel is not a member of the ICC, ICC examines Israel, although Israel is a democracy and has taken several initiatives to peace with the Palestinians – Palestinians have said no to get a state since 1937 – Read more here. The ICC has ignored all arguments for why they do not have legal issue to investigate Israel for war crimes, this also applies to ICC judge Péter Kovács who have documented why the ICC under the Roma statutes does not have the legal issue in place – read more here.

The ICC will investigate Israel for war crimes under the Gaza war in 2014, but refuses to investigate the murder of three Jewish teenagers Naftali Frenkel, Gil-Ad SHAER and Eyal Yifrach. The boys were abducted and murdered by Hamas terrorists in Judea and Samaria (West Bank) in June 2014, the incident triggered the Operation Protective Edge (Gaza war) later the same summer. The three boys’ families have published a letter in which they criticize ICC’s decision to investigate Israel prewar crimes.

The families of the three murdered boys call ICC’s decision for “evil and cynical”. They point to ICC’s mandate to investigate the incidents about Operation Protective Edge (Gaza War) starts on 13
. June 2014 – one day after the boys were abducted. Therefore, the kidnapping and the killing of the boys will not be included in ICC’s investigation.

It is the Palestinian authorities (PA) who have asked the ICC to investigated alleged war crimes from June 13, 2014. It is hardly random that they have chosen just that date – one day after the abduction of the three Israeli boys.

No 13-year-old Halel Ariel who was murdered in his bed in 2016 in Kiryat Arba of a 17-year-old Palestinian terrorist can expect to get justice in the ICC. Halel’s mother already approached ICC’s chief complaint in January 2020, with demands that they investigate the leaders of the Palestinian authorities (PA) for their role in the terrorist attack – Halel’s mother never received answers to his inquiry. Read more here.

There have been loss of human life on both sides and every life lost is a disaster, but it does not exempt the terrorist group Hamas who stands on the EU terrorist from their responsibility to murder Israeli children, women and men, Fire several thousand rockets into Israeli cities, or from abusing and terrorizing the people of Gaza to achieve their declared goal of wiping Israel – read more here.

in Hamas Charter (Hamas Charter – Read more Here), adopted 18 August 1988, there are, among other things, “As a Jewish state with a Jewish population, Israel is facing Islam and Muslims,” ​​declares Hamas. Their goal is to wipe out Israel and replace the world’s only Jewish state with Arabic state number 23 and Muslim state number 58. The ultimate goal is to “lift Allah’s banner over all things”.

A Hamas terrorist is motivated by Hamas Charter: “Our struggle against the Jews is very extensive and serious, and will consequently need all the loyal support we can get, and later it must be followed by new promotion and reinforced Of battalions from the widely branched Arab and Islamic world until the enemies are overcome and the travel of Allah is a fact, “writes Hamas.

Hamas is an Islamist organization according to all definitions: “The ultimate goal is Islam, the Prophet is our example and the Qur’an is the constitution,” writes Hamas in their charter. The classic anti-Semitic conspiracy combs in the Charter also show that the group has retrieved inspiration from Nazis or other antisermites in Europe.

On 9 February, Israeli expert in international law, former ambassador in Canada and current head of Institute for Contemporary Affairs, Jerusalem Center for Public Affairs, Alan Baker in the newspaper Times of Israel:
– It is Tragic and ironic that Israel – one of the founders behind the vision of an independent international criminal court after Holocaust has now come in ICC’s search light. Israel was one of the leading countries as early as the start was actively involved in the negotiations and the preparation of the ICC Foundation document. Therefore, it is all the more ironic that Israel is now accused by the ICC on the basis of the Palestinian authorities (PA) political manipulation.

The intention of the ICC was to create an independent legal body to ensure that the worst war criminals were responsible for their crimes against humanity. Instead, ICC has now become a body that can be manipulated by political interests aimed at Israel.

The Palestinians situation in Gaza is not improved by ICC’s absurd treatment of Israel.

According to available data, during the Gaza war in 2014, 2251 Palestinians were killed by them, 1462 civilians. The Palestinians are allowed to be in the nation of the international community that are not interested in the violent corruption in the Palestinian authorities (PA), something that was already documented by human rights organizations in 1997. Nor does the consequence of the consequence of Milliards has abused billions For example, to pay large sums in terrorist reward to convicted Palestinian terrorists with Israeli life on conscience. Last year alone, it amounted to over a billion kroner, at the same time as PA has not handled the corona crisis as they should. Read more about how to abuse Danish assistance here.

ICC does as the international sa
MFF – They close your eyes to the terrorist group Hamas’ and pass on violation of basic human rights. Instead, ICC makes what we have seen over decades – they put the blame in Israel.

The last 20 years Hamas fired several thousand rockets into Israeli cities (in 2019 interviewed Infinitum News Serot’s Mayor, here he told, among other things, that many of the city’s children suffer from PTSD after decades of rocket attacks from terrorists in Gaza – read Interview here).

In 2014, the conflict between Israel and the terrorist group Hama’s new heights. According to the BBC fired Hamas alone in 2014, 4591 rockets into Israeli cities. According to Jerusalem Post, the many rocket attacks meant that 40% of Israeli children in southern Israel (Otef Aza) bordering against Gaza, today suffer from PTSD. In order to protect its civilian population with the repeating rocket attacks, Israel Operation initiated Strong Cliff , in order to neutralize Hamas’ terrorist cells and rocketary numbers. It should be added that Hamas has a clear tactic about placing rockets, arms stores and other in civilizations, schools and hospitals to maximize civil tabs and use it as anti-Israelk propaganda. To minimize the civilian loss among the Palestinians, the Israeli army (IDF) used a tactic called Roof Knocking – IDF warned the population of Gaza in advance about where and when they would bomb.

What other army warns a civilian population about where or when is bombed? It must be added to Israel work continuously to minimize civilian losses using technology that is not seen elsewhere in the world. Read about Israel’s recent development to minimize civil tabs: Israel’s latest weapon “revolutionizes the battlefield”: The weapon has been developed to fight against enemies who use human shields.
While IDF would minimize the Civile loss among the Palestinians in the areas where Hamas terrorists hid, ordered Hamas de Civilians to be human shields and demanded them in the areas like IDF had asked them to leave.
Israel does not want to cause civilian loss among the Palestinians, IDF tries more than any other army to avoid human loss. Therefore, ICC’s decision to investigate Israel for war crimes is absurd. According to the ICRC (International Committee of the Red Cross), Israel, after my assessment, has not committed war crimes.
In Article 51, among other things: “Protecting the civilian population” in Article 1 stands there Moreover, civilian population must enjoy a general protection against dangers of military operations. In the fact that Israel warns in advance where they will bomb, to avoid civilian loss, I cannot see there is evidence to accuse Israel for war crimes.

In Article 2 states that civilians must never be the goal of a bomb attack. If the terrorist group Hamas had an iron grip on the civilian population in Gaza, if not Hama’s attack Israeli cities with rockets, dug attacks into Israel, sent terror cells into Israeli cities to murder Israeli children, women and men or sent balloons with explosives in over the border , Israel would not bomb the enclave to defend his inhabitants. In addition, civil loses in a war are not in themselves a war crime. I find it appalling that ICC does not investigate Hamas for infringement of Article 51, but instead calls their acts of terrorism, with ICC’s Chief Personal’s own words: possible war crimes (her opinion is strictly mentioned in ICC’s press release). Hamas is not responsible for their war crimes against Israelis and Palestinians.

Israel and IDF commits like all other errors. But in the light of the complex situation as the Israeli army must navigate in, against an enemy as a trample on human life and human rights and, as their declared goals, have to annoy Israel, I have difficulty seeing that how they can do better or different .

With his absurd decision, ICCs fails both the Palestinians and the only democracy in the Middle East, by making Israel for scapegoat for Hamas’ Brutality.

media coverage The conflict between Israel and the neighbors

Apr 9, 2021
International law PA - Palestinian Authority The conflict between Israel and its neighbors