– Israel does not have the right to exist 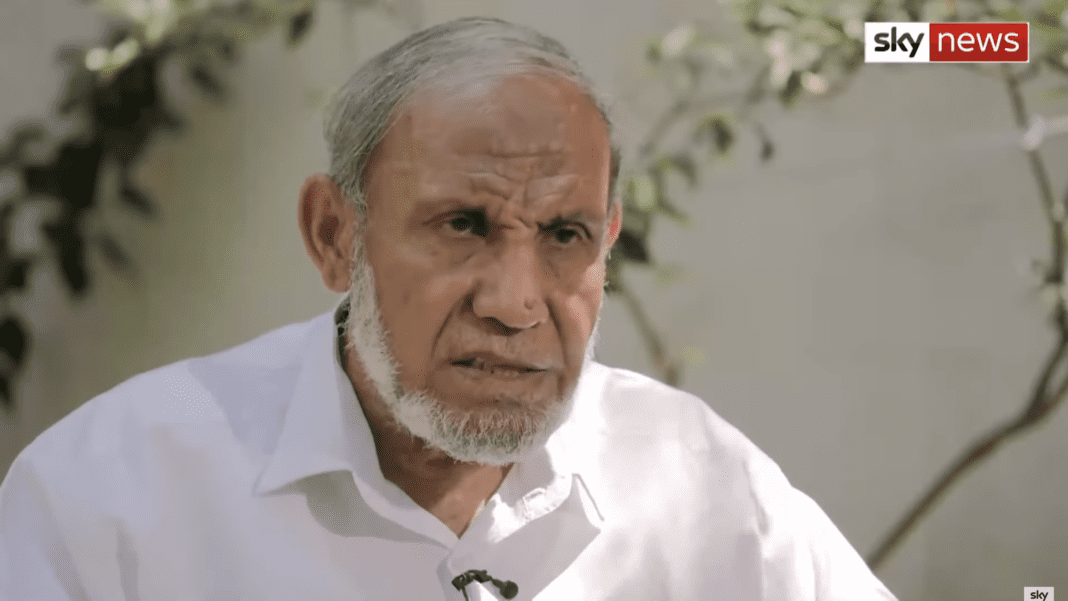 Mahmoud Al-Zahar is one of the founders of the Hamas Terror group that has held the inhabitants of Gaza in his iron grip since 2007 after the terrorist group conducted a bloody coup against Fatah who had had control there since Israel left Gaza in 2005. Hamas stands among other things The eus the terrorist list. Hamas is supported How to stand in Hamas

Hamas is, among other things, on the EU terrorist and support both economical, with the wet and ideological of Iran. In addition, Hamas millions of dollars get from among other Qatar. Read: Guess who pays for Hamas rockets. Hamas does not have to worry about the rocket expenses – The bill is paid.

Hamas rejects Oslo agreements, a two-state solution and does not recognize Israel’s right to exist. A Hamas terrorist is motivated by the Hamas Charter. “Our struggle against the Jews is very extensive and serious, and will therefore need all the loyal support we can get, and later it must be followed by new promotion and reinforced by battalions from the widely branched Arab and Islamic world until the enemies are overcome And Allah’s Sejer is a fact, “writes Hamas.

Hamas Charter (Hamas Charter – Read more here, adopted 18 August 1988.” As a Jewish population, Israel is facing Islam and Muslims , “Declares Hamas. Their goal is to wipe out Israel and replace the world’s only Jewish state with Arabic state number 23 and Muslim state number 58. The ultimate goal is to” lift Allah’s banner over all things “. Read about Hamas here.

Now, Mahmoud Al-Zahar has given a rare interview to British Sky News. In the interview he says that Israel does not have the right to exist and that Hamas’ strategy is to attack civilians in Israel.

Also Hamas’ spokesman has called a spade for a spade in his interview with Sky News:

Al-Zahar says “Hamas won the war” and that they won it thanks to their ability to shoot many rockets against densely populated civilian areas in Israel.

– The new element of the latest camprome is how the resistance movement, especially in Gaza, has managed to attack Israeli goals, including the most populated areas in Israeli civil society. How long the Israelis will accept that I think is the question, he says.

Hamas and Palestinian Islamic jihad – The two largest terrorist groups in Gaz Stribe, fired over 4300 rockets against Israel during the eleven days of the fighting. The intensive rocket attacks against Israel meant that Israelis who live close to Gaza almost had to stay around the clock in shelter or escape to other parts of the country. In the city of Ashkelon, many of the city’s 150,000 residents stayed in the shelter for more than ten days in a row.

The British journalist Understanding Al-Zahar on Hamas Avyrge’s Rockets MOT SInte population in Israel – and that they are skiing from SIVILE areas of Gaza.

– I fires rockets from civilian areas here in Gaza against the civilian population in Israel. It is not acceptable, it is war crimes, says Stone
.

Al-Zahar rejects the allegations that Hamas puts the lives of the Palestinians in Gaza.

– Not a single rocket was fired from civilian areas. We [fired] Most rockets from the border, claim Al-Zahar opposite the British journalist.

– But it is not true, is it well? Because we have seen clips of rockets that are fired from populated areas in Gaza town against Israeli community, says Stone.

In total, 13 Israeli in Israel killed at the rocket attacks of Gaza, including a 5-year-old boy from the city of Serot – read here and a 16-year-old Arab Israeli girl and her father from the mixed town let – read here. Twelve of the victims were civilians, a victim was an Israeli soldier. Over 335 was injured, several of them critically. In addition, the figures for the psychological consequences and the number of Israelis who get PTSD and anxiety of the repeating rocket attacks are incalculable, the same is the extensive destruction in several Israeli cities.

Read: Two Danish women tell about life with Hamas rockets. The Terrorg group Hamas has attacked Israel’s civilian with rockets for 20 years and they hit everything and everyone – also the Danes who live in the country.

According to Hamas, at least 243 Palestinians became killed, including several minors. Hamas does not distinguish between members of terrorist groups and civilians – ie. That Hamas talk covers both civilian losses and killed terrorists. According to Israeli defense, the majority of the killed terrorists. They also say that many Palestinians were killed by flawed Hamas rockets who were aimed at civilians in Israel and exploded in Gaza – read here. Several hundred hamas rockets have exploded in Gaza.

Sky News journalist also asked why Hamas uses hundreds of million dollars on military infrastructure – for example large networks of tunnels, instead of spending the money on Gaza’s poor population. Al-Zahar answers that they do it to “protect themselves from Israeli aggression”.

Hamas has built a huge network of tunnels of 150 km through Gaza. The Israeli defense says they have managed to destroy over 100 kilometers of “metro” as the network is called.

In the interview, Al-Zahar also asked if Israel is entitled to exist.

The al-Zahar does not tell is that the majority of Jews in Israel originate from Arab and Muslim countries. 99 percent of the Jews in Arab countries over the past 80 years, either been murdered or displaced from their home countries after several thousand years – read here. Most of them ended up in Israel.

Al-Zahar also does not tell the Jews have several thousand years of history in Israel – read here.

On the question of the possibility of peace talks with Israel, Al-Zahar responds that the question is irrelevant.

Recently, the Norwegian journalist Fredrik Grundvik wrote on TV2 Norway that Hamas does not want to annihilate Israel, but
That they are pragmatic and will accept Israel’s borders.
Who do you think Hamas asked – Grassvik and one of Hamas’ founders?

See the interview with al-Zahar in British Sky News: