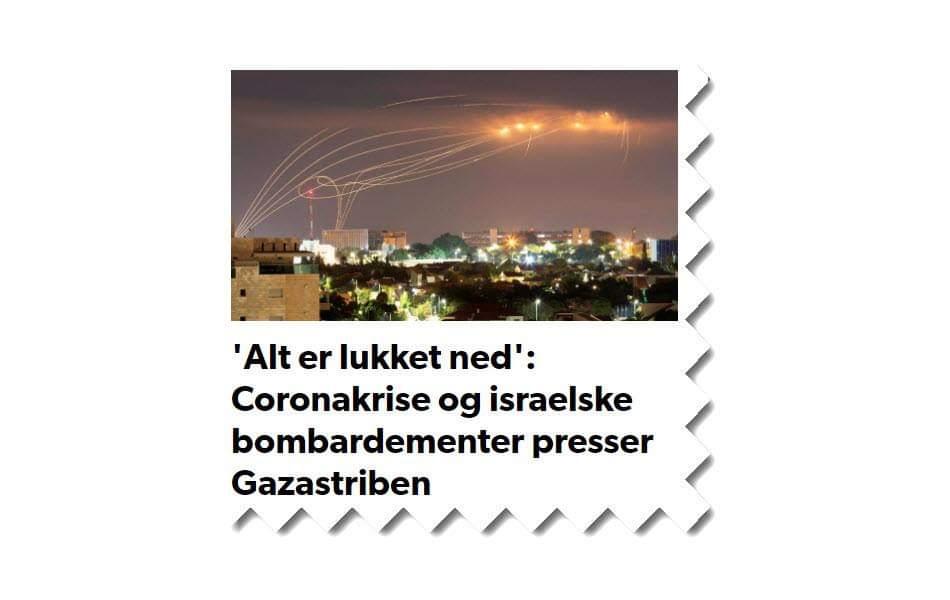 But the Israeli reality does not affect DR’s coverage of what is happening in Israel and the Gaza Strip – on the contrary. On August 27, DR published an article about the situation in Gaza.

It’s already going wrong for DR in the headline
In the headline, the repeated rocket attacks and explosive balloon attacks that have ravaged Israel in recent weeks have been changed to being Israeli attacks on Gaza -stripen – blatant error and bad journalism which absolutely does not contribute to the Danes getting a correct picture of what is up and down in the conflict between Palestinian terrorist groups and Israel.

DR uses image of rocket attacks from Gaza to demonize Israel
Most readers only see the headline and the main image – then they have already formed an impression of the content of the article. If you read DR’s headline and picture, you will probably understand it so that the picture shows a rocket attack from Israel into Gaza. In fact, the picture shows Israel’s missile defense system (Iron Dome) in action during one of the many rocket attacks that Israel has been subjected to from Gaza. DR is not just showing bad journalism here – they are distorting reality to demonize Israel. In January, Infinitum News wrote that in the last ten years, the Iron Dome has fired 2,400 rockets fired from Gaza against Israel – it had dressed DR to include that kind of information in their article. Just as it had also dressed DR to mention Israel’s latest development of Light Blade which is the world’s first of its kind. Light Blade must shoot down explosive balloons and airborne explosives that threaten people, nature, wildlife and agriculture in southern Israel. Read MIFF’s article on Light Blade here.

Here is the true story behind DR’s picture showing rocket attacks on Israel on August 21:

DR’s misleading content and disproportion is deep good night
Out of a longer, painterly article with more pictures from Gaza, DR makes the above remark in the penultimate section of the article. DR’s report on the situation in Gaza is completely out of proportion – DR does not focus on the Gaza Strip being controlled by Hamas, which is a terrorist organization whose only goal is to annihilate Israel. For several years, Hamas and other terrorist groups in Gaza have attacked Israeli residents in Israel via rocket-propelled grenades, rockets, explosive balloons, kidnappings and other methods. If Hamas used their resources to help the Palestinian people in Gaza, their situation would look completely different than it does. Hamas spends huge sums of money on rockets, weapons and digging attack stones for the sole purpose of killing Israelis. Hamas controls Gaza – therefore everything that happens in Gaza is their responsibility.

Where is DR’s report on Israeli children in southern Israel suffering from PTSD after many years of terrorist attacks from Gaza? Read MIFF’s interview with Sderot’s mayor – Our children pay the price for Hamas’ rocket attacks.

No country can accept that its population is attacked by terrorist groups – Israel has the right and duty to protect its population and it is time for DR to contribute to a factual debate about Israel instead of spreading misinformation and lies.