Time to pray together in the midst of the Corona crisis 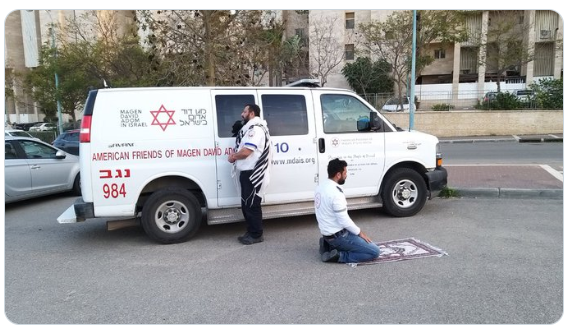 The Israeli ambulance service (Magen David Adom) usually receives about 6,000 calls a day. Since the Corona crisis began, they have received approx. 100,000 calls a day, writes The New York Times.

In the southern city of Beersheba, a couple of emergency medical staff were approx. 40 minutes inside their guard on Tuesday afternoon when everything suddenly became quiet. No panic attacks, no elderly people running out of medicine, no kitchen accidents in people sitting at home in isolation to avoid Corona infection.

The two colleagues stepped out of the ambulance to pray.

Avraham Mintz (43), is Jewish and from Beersheba. Mintz wrapped himself in his prayer shawl and turned north toward Jerusalem. Zoher Abu Jama (39), is a Muslim and from Rahat. Abu Jama unfolded his prayer rug on the road and knelt south toward Mecca.

A colleague took a picture and posted it, which according to the newspaper got a lot of attention on social media.

According to the two men, their back-to-back worship is nothing new.

-We strive to pray at the same time instead of doing it at different times because we are extraordinarily busy at the moment, Mintz said.

At the time of writing, eleven people have died of Corona in Israel and in the West Bank the death toll is also rising.

-The whole world is fighting Corona. It is a disease that does not distinguish between people, religion and gender. But you put it aside. We work together and live together. This is our life, said Abu Jama.

Abu Jama said he had his elderly mother in mind as he prayed: She is fragile and he has kept his distance from her even though they live under the same roof. Mintz said he had asked God “to let me see the end of this – the good end. Because I know there will be a good end. And I hope to be there when it happens.”

A fateful choice for Israel