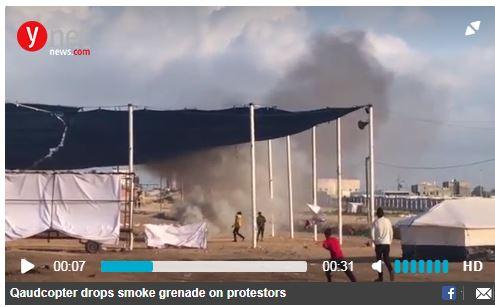 Ca. As of this morning, 40,000 Palestinians have gathered in 13 hotspots on the fence between Gaza and Israel. Ca. half a kilometer from the fence there are tent camps with a few thousand more protesters. Hamas has made a great effort to get participants – i.a. by giving money to the families of the participants – to close schools and educational institutions by means of a “general strike” so that the young people were given time off and by arranging transport to the meeting points. And the number of demonstrators was probably the highest since Friday’s demonstrations began on April 30, 2017. Still, the expectation of about 100,000 protesters was in the upper range.

A military source estimates that Hamas has responded to the disappointment with the number of participants by intensifying the activity, which could provoke the Israeli soldiers to use various types of violence to defend the border and the military area along the fence, which everyone in the area knows must not enter into.

The result so far

52 dead and about 2,400 wounded (half from shots, the rest from eg tear gas and smoke poisoning). Right now. It is estimated that four of the dead were members of Hamas security forces.

The Palestinian Authority calls for “immediate international intervention to stop the massacre of protesters.” In particular, it was called for Arab and Islamic governments to do something.

JPost reports that the UNHRC – the UN High Commissioner for Human Rights, Zeid Ra’ad al Hussein, has also called on the international community to protect the protesters’ right to life.

[Update May 15 : Most sources now say there were “only” 35,000 participants – but the death toll has risen to some 60. According to Khaled Abu Toameh, a Palestinian-Israeli journalist, Hamas says 10 of those killed were part of the Hamas Interior Ministry. There are – of course – more and more calls for condemnation and investigations. ]

Both YNet News and the Times of Israel have during the day written about what Shin Bet has learned about Hamas tactics in connection with the capture of a Hamas member. As a rule, Hamas members must stay away from the fence and stay alive while supplying protesters without formula Hamas membership with knives, scissors, gas bottles, Molotov cocktails and burning kites for use in direct attacks on and over the fence. If such a “civilian” succeeds in opening a hole, it is the job of Hamas members to penetrate across the border and carry out as many terrorist attacks as possible.