Analysis: Germany’s fight against BDS is not just about BDS 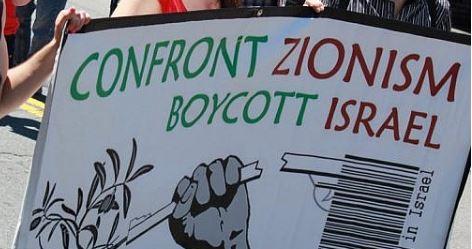 The Jerusalem Post reports that Boycott, Divestment and Sanctions (BDS) had a bad week last week – after the movement suffered two major defeats.

BDS ‘first defeat took place during Eurovision in Tel Aviv. The competition was watched by about 200 million viewers – they saw Israel as a “normal”, sunny, fun, loving, vibrant, young and energetic country. The air went, so to speak, out of the BDS balloon – except for the Icelandic punk band, who showed a Palestinian scarf for a few seconds while sitting in Greenroom after getting their points.

The resolution states, among other things, that:
“The argumentation patterns and methods used by the BDS movement are anti-Semitic.”

This is the first time such a resolution has been adopted in a European Parliament. The non-binding resolution also bans public support for organizations that support BDS.

The decision to adopt the resolution has also reassured several observers who had previously expressed concern that Germany’s sense of responsibility towards Israel has diminished as a new generation of German leaders has emerged. The concern was supported by Chancellor Angela Merkel’s ruling party – Germany’s Christian Democratic Union (CDU), the Social Democratic Party (SPD), Germany’s Liberal Party (FDP) and the Greens.

It seems that the resolution and its broad support are a sign that Germany, with its history and experience, now recognizes that criticism of Israeli politicians is one thing – while BDS is something completely different. Germany recognizes that there is a limit which must not be exceeded. A limit that BDS has exceeded: The resolution states, for example, that a BDS campaign requiring Israeli products was marked with stickers with the slogan: “Do not buy”. The slogan gave associations to the Nazi regime in Germany, where Jewish-owned companies and shops were painted over with the slogan: “Do not buy from Jews”.

However, the BDS resolution is also about internal German politics.

The far-right, anti-immigrant party Alternative for Germany (AfD) – has been excluded by the Jewish community in Germany and the Israeli government. AFD had put forward its own proposal for a total ban on BDS. AFD’s move was seen as an attempt to embarrass the government on the one hand not wanting to support AFD’s resolution and on the other hand not wanting to vote against anti BDS legislation.

As a consequence, Merkel’s coalition got ahead of AFD’s bill by adopting its own resolution. Even Die Linke (Left Party) proposed the introduction of a resolution condemning BDS anti-Semitic statements.

Israel’s official reaction to Germany’s adoption of the resolution was telling, according to the Jerusalem Post. Prime Minister Benjamin Netanyahu, Foreign Minister Yisrael Katz and Knesset President Yuli Edelstein made official statements thanking and congratulating the German parliament – not to mention the Merkel government..

Netanyahu tweeted: “I congratulate the Bundestag (German parliament) on its important decision to brand the boycott movement (BDS) as an anti-Semitic movement and the announcement that it is banned from funding it.”

Katz wrote: “We welcome Parliament’s resolution, which by a large majority adopted a resolution against the BDS movement.”

Similarly, Edelstein tweeted: “Thank you #Bundestag for the brave and important decision!”

Why do Israeli politicians weight the German parliament in their response – at the expense of the German government?

According to the Jerusalem Post, this is because – despite the German parliament’s condemnation of BDS as being anti – Semitic, Germany continues to have a strong trade relationship with Iran and is at the forefront of European efforts to establish ways to circumvent US sanctions against Iran and thus increase trade with Iran.

Berlin can now – if Jerusalem is worried about waving the anti-BDS resolution in Israel’s face when they – or the United States criticize Germany’s relations with Tehran.

According to the Jerusalem Post, Israel’s official response to the BDS resolution signals that the decision is appreciated but that it does not absolve Germany of its responsibility. The German Chancellor has stated that Israel’s security is part of their raison d’être – from harsh criticism of its relationship with Iran, a country that has openly declared a desire to destroy the Jewish state.