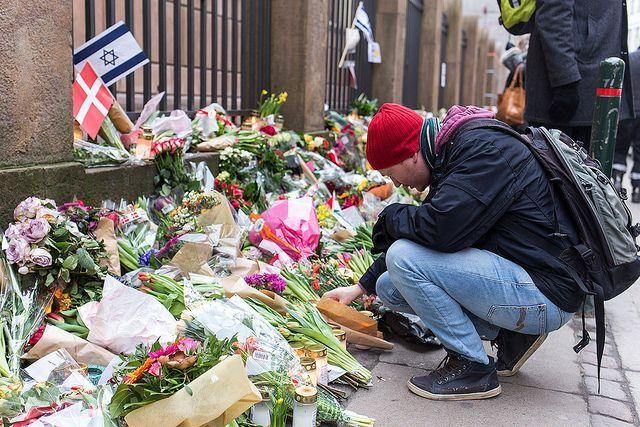 In 2014, a synagogue in the German city of Wuppertal was subjected to fire terror by three Palestinian-Germans. The perpetrators (terrorists) explained in court that “it was their way of demonstrating against Israel’s war in Gaza”. The judge accepted their explanation and ruled that the attack was not anti-Semitic motivated. So writes Rabbi Andrew Baker, who is also the director of the AJC’s Department of International Jewish Affairs and the personal representative of the OSCE President in the fight against anti-Semitism, and Holly Huffnagle who is the AJC’s US director of anti-Semitism in the Times of Israel

Jewish leaders and German federal officials were outraged by the German verdict. There can be no doubt that an attack on a synagogue is anti-Semitic. Still, there are doubts about that type of attack as soon as Israel is brought on the field, Baker and Huffnagle point out.

The picture below shows a man in front of the synagogue in Copenhagen after the terrorist attack in 2015 where the synagogue’s volunteer security guard, Dan Uzan, was killed by a Palestinian-Danish terrorist. Read MIFF’s article: February 14, 2015 – the day as forever. has changed Denmark

Fortunately, there were also those who protested against the new trend.

Among the critics was then-US Secretary of State Colin Powell, who in 2004 told the Organization for Security and Cooperation in Europe (OSCE): “It is not anti-Semitic to criticize Israel’s policies. But the line is crossed when Israel or its political leaders are demonized or subjected to hetz, for example through the use of Nazi symbols and anti-Semitic caricatures. ”

The OSCE stated in 2004:“ international development or political issues, including those in Israel or elsewhere in the Middle East can never justify anti-Semitism. ”

Definition is crucial to the fight against anti-Semitism
In order to fight anti-Semitism effectively, it is crucial to define what anti-Semitism is – no matter what form it takes. In 2005, following the advice of experts from Europe, Israel and the United States, the EU Monitoring Center on Racism and Xenophobia (EUMC) developed a working definition of anti-Semitism with a set of clear examples. While many recognized hatred and prejudice against Jews as being anti-Semitism, fewer were aware that stereotypes and conspiracy theories directed at Jews are also anti-Semitism, that Holocaust denial must not be the subject of historical debate but is an attack on Jewish memory and history. There were also examples, related to Israel, reminiscent of those described by Secretary of State Powell. Read MIFF’s article on the International Holocaust Remembrance Alliance (IHRA) definition of what anti-Semitism is here.

The comprehensive definition was adopted by the 31 member states of the International Holocaust Remembrance Alliance (IHRA) in 2016 (Denmark is also a member state, but the definition has not yet been introduced in Denmark). The IHRA’s working definition of anti-Semitism has been used by several countries to assist police and other authorities responsible for monitoring and identifying anti-Semitic incidents. It is also an integrated training tool used in the training of prosecutors and judges.

When will Denmark come on board?
The UN Secretary-General and the European Parliament have recommended that countries use the work tool. The European Council has also called on all Member States to use it. Nearly 30 countries have introduced it – including Sweden and Spain, both of which are countries where you will encounter some of the most Israel-critical voices. The IHRA’s definition of work has received cross-party support in the United States. Under both Democratic and Republican leadership, the U.S. State Department has used the tool in its international monitoring of anti-Semitism. In 2017, Congress recommended introducing the IHRA’s definition of work.

Denmark has not yet introduced the IHRA’s definition of anti-Semitism. Read MIFF’s article: Minister of Justice Hækkerup: – Crucial with action plan against anti-Semitism in Denmark.
Read MIFF’s article about Anne Sofie Allarp’s warning against anti-Semitism which has shown its ugly face in the circumcision debate in Denmark and selected circumcision comments on party chairman of the party Fremad (Ammitzbøl-Bille has dissolved the party) and Member of Parliament Simon Emil Ammitzbøll-Bille’s wall:
“circumcision is gross violence,” “mutilation of children,” “abuse due to superstition,” “medieval,” “abuse of their boys,” “they are not worth destroying Europe for,” “send them back,” “Madness,” “infect them with corona.”

We continue to wait for Denmark to pull on its work clothes and fight the growing anti-Semitism with more than beautiful expressions in the press. Read MIFF’s articles on anti-Semitism in Denmark here.

Free play for anti-Semitism on social media
Governments around the world do not have the ability to monitor everything that happens on social media. Therefore, Facebook and other social platforms are experiencing increasing pressure to stop the spread of anti-Semitism. The American Jewish Committee (AJC) and many other organizations have also recommended introducing the definition of work on social media. Read MIFF’s articles on Fatah’s glorification of terror on Facebook.
Read MIFF’s demands on Facebook to introduce the IHRA’s definition of anti – Semitism. Read Facebook’s response to Infinitum News here.

The same critics who have previously been against the introduction of the definition of work have now again thrown themselves into the debate. Critics claim that by introducing the working definition, social media will also remove postings and comments that should not be removed, thereby harming freedom of expression. Baker and Huffnagle believe that those who monitor social media should learn to identify anti-Semitic content when they see it.

Experience in Europe shows that the argument that it will go beyond freedom of speech or stop critics of Israel simply does not hold. Despite even stricter restrictions imposed on social media in the US, it has not gone beyond freedom of expression and therefore Baker and Huffnagle do not think the critics’ arguments hold water.

IHRA’s definition is a educational tool
The job definition is an educational tool set in the world to help public authorities and civil society understand what anti-Semitism is and be able to identify it when they see it – whatever the shape. The IHRA emphasizes that the definition of work is neither legally binding nor a speech code, although some may try to make it so, Baker and Huffnagle point out

– The work definition is an important and effective tool in the fight against anti-Semitism. Like any other tool, it can be abused – therefore we must be vigilant so it does not happen. But that is not an argument for not using the tool, Baker and Huffnagle emphasize.

The EU has understood this: “You cannot fight what you cannot define. The international definition of anti-Semitism by the International Holocaust Remembrance Alliance is a benchmark, “said Margaritis Schinas, Vice-President of the European Commission at a recent EU conference.

– The Job Definition is a tool that helps anyone committed to fighting anti-Semitism in the United States and in the world, on social media and in the physical world. Use the tool! concludes Baker and Huffnagle.

The invitation is hereby passed on to the Danish decision-makers – use the tool and use it!