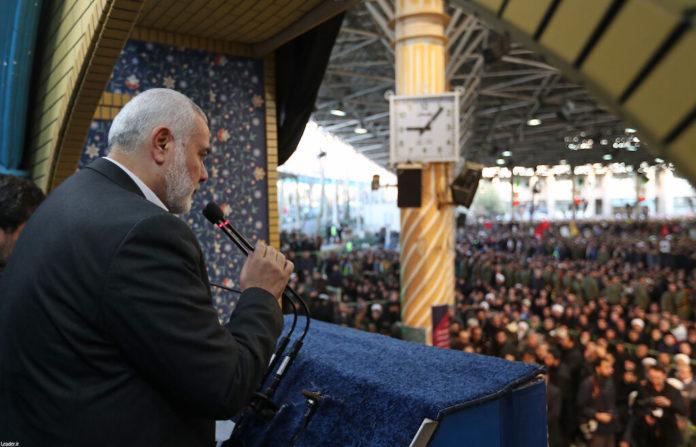 MIFF has previously written about the participation of Hamas leader Ismail Haniyeh at the funeral of Iranian General Qasem Soleimani, who was killed in a US drone strike in Baghdad on January 3. Haniyeh’s participation has provoked strong reactions in several Arab countries, including Saudi Arabia and Egypt, writes Israel Hayom.

The Egyptians should be furious that Haniyeh attended the funeral of one of the leading leaders in Iran, a country that Egypt and other Arab countries consider a regional enemy. The Hamas leader not only attended the funeral, he also spoke and condoled with Iranian Supreme Leader Ayatollah Ali Khamenei.

Both Egypt and Saudi Arabia are said to have asked Haniyeh in advance not to attend the funeral, but the warning was ignored by the Hamas leader. Egypt, which borders the Gaza Strip, had allowed Haniyeh to travel through Egypt for a round of international visits after Haniyeh promised not to travel to Tehran or meet anyone in the Iranian leadership.

Haniyeh’s visit to Tehran, his attendance at the funeral, and his words of remembrance for Soleimani – calling him [Soleimani] the biggest supporter of the Palestinian resistance movement and the Palestinian struggle for national recognition – were a disgrace and nothing less than a shameful attack on Egypt’s national honor, says a senior Egyptian official.

While Iran is a Shiite Muslim country that wants a Shiite Muslim caliphate in the Middle East, Egypt, Saudi Arabia and other Arab countries are mostly Sunni Muslim. Shia and Sunni Muslims have long been in conflict with each other. The participation of a Hamas leader at the funeral of an Iranian leader is a sign that Haniyeh and Hamas have sided with Iran, the Egyptian official believes.

-Haniyeh and Hamas have sided with Iran while openly ignores the clear message from Cairo and other Sunni Muslim countries. Qasem Soleimani is responsible for the killings of thousands of Sunni Muslims and many Palestinians.

More than 4,000 Palestinians have been killed in the Syrian civil war – Soleimani and his Quds Forces have been active on Bashar al-Assad’s side. Haniyeh is said to have excused his visit to Tehran by saying that Soleimani’s funeral was “a special event” that required the presence of the Hamas leader. Iran has given many millions of dollars annually to Palestinian terrorist groups in Gaza.