– Today we are one family, the family of the sons of Abraham 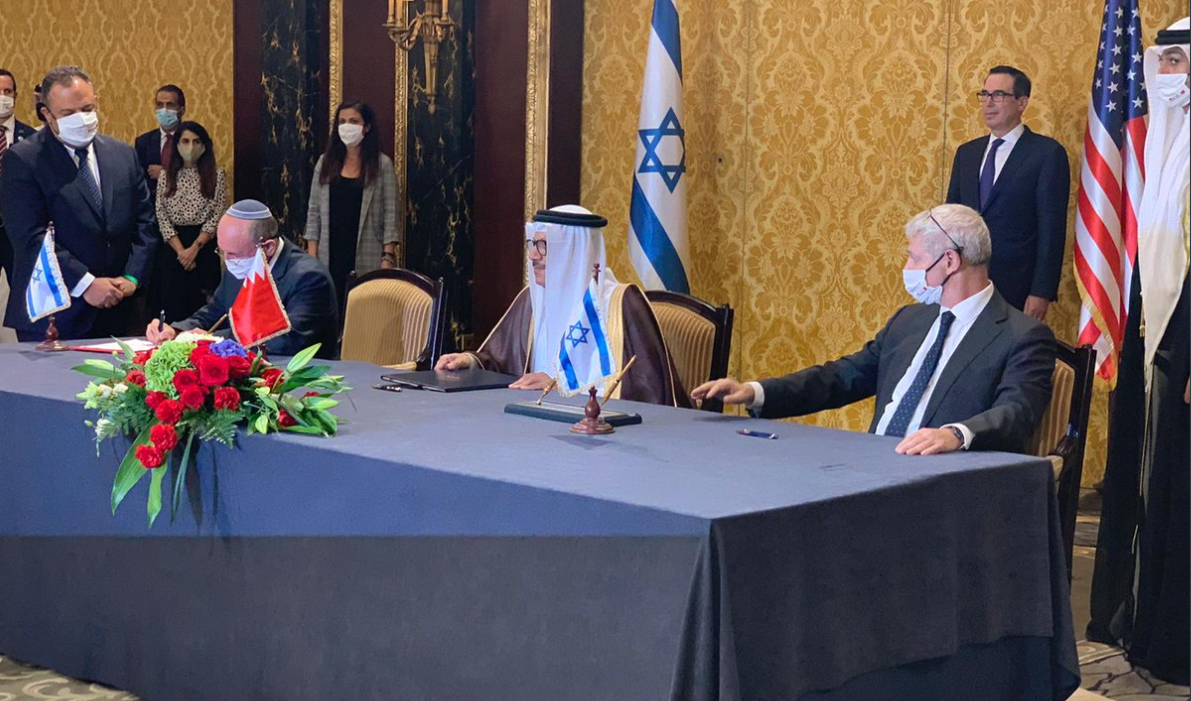 Sunday 18 October became another historic day in relations between Israel and an Arab country. Israel and Bahrain signed an agreement “joint communication on the establishment of peaceful and diplomatic relations” during a visit by a senior Israeli government delegation to Manama in Bahrain on Sunday, the newspaper Jerusalem Post writes.

Israel and Bahrain sign a memorandum of understanding on peace and normalization.

Israeli Prime Minister Benjamin Netanyahu spoke with Bahraini Foreign Minister Adullatif bin Rashid Al-Zayani before the agreement was signed: “We are taking a huge step towards promoting peace… It is the start of a breakthrough towards peace. “

The first El Al flight to Bahrain’s capital took off from Ben-Gurion Airport with US and Israeli officials on Sunday morning. It was flight number LY973, ​​corresponding to Bahrain’s international country code. Captain Bobby Lavi addressed his passengers and said: “We wish you a pleasant flight and look forward to a new era of peace, Salaam and Shalom throughout the region. Thank you. “

Israel signed the Abrahamic Agreements with the United Arab Emirates and Bahrain in front of the White House on 15 September 2020 – read MIFF’s articles on the Abrahamic Agreements here. Al-Zayani and Deputy Secretary of State for International Affairs Abdullah bin Ahmed bin Abdullah Al-Khalifa welcomed the Israeli delegation when he landed in Manama. with new stability and prosperity for the region, which will allow our young people throughout the Middle East to achieve their potential and ambitions, something which they have been denied for far too long. Today, we have laid the foundation through which we can achieve that goal. ”

Al-Zayani expressed his appreciation for Bahraini King Hamad Bin Isa Al Khalifa’s “tireless commitment to peace, dialogue and cooperation”, which he said has brought the region to a point where people “can now truly see a realistic alternative to decades of divisions and conflict. “

Before the Israeli delegation boarded the El Al plane at Gen Gurion airport en route to Bahrain, Ben-Shabbat said the delegation was on its way to Manama to “translate the White House statements into something practical.”

After landing in Manama Ben-Shabbat spoke Hebrew and Arabic and said “we have come to add blessings and peace.”

He said that Israel and Bahrain are in many ways similar – they are both geographically small countries with a small population that has “a pioneering spirit”.

Ben-Shabbat referred to the part of the Torah that was read the day before, where G_d separates darkness from light and Ben-Shabbat added: “Together we spread light and increase the good . “

Before leaving, Friedman said: “We bring the Bible to life with peace between Abrahams sons. “

Mnuchin called the Abrahamic Agreements” the most extraordinary result of the last 25 years. “

– I think that when we look back at the Abrahamic Covenants in ten years they are just as important, if not more significant than Israel’s peace agreements with Egypt and Jordan, in the way they have changed the whole region – especially economically, but also from a security and cultural point of view. “

The Israeli delegation spent only about seven hours in Manama meeting with their Bahrain counterparts, after which they signed eight documents, including a declaration of peace, which, like the memorandum signed in Washington on 15 September, is not a treaty. The agreement involves the establishment of full diplomatic relations and the opening of embassies. The other documents related to economic cooperation, civil aviation, cooperation between the ministries of finance, communications and post, agriculture, cooperation between foreign ministries and visa waiver for diplomats.

Unlike the trip to the Emirates where a kosher catering company prepared the meals, distributed El Al stewardesses sandwiches for those who wanted kosher food. An official said that the planning of the trip only fell into place on Friday due to Corona restrictions, security and the delegation’s travel plans.

– Given the choice between a banquet or using the time for efficient work meetings, I think the latter is a better use of time, said the Israeli official.

After the signing ceremony, the Israeli delegation traveled back to Israel, the US delegation flew to Abu Dhabi for “the first ever business summit on the Abraham Accords”, then they fly back to Tel Aviv

Tuesday The first official delegation from the Emirates is expected to land in Israel. Due to Corona restrictions, Emirati officials will stay at the airport for several hours before flying back to Abu Dhabi.

Houda Nounoo, Bahrain’s former ambassador to the United States and himself a Jew, gave Israeli journalists a tour of the synagogue of Jewish communities (there are only about 30 Jews living in Bahrain). The synagogue has not been in use for a long time – it will be reopened on February 25, 2021 in connection with Purim (Jewish Shrove Tuesday) after a lengthy renovation. Read MIFF’s article on the Jewish community in Bahrain here.

– Coexistence in Bahrain was here because someone talked about coexistence and tolerance. Bahrain is the only country in the Gulf that has native Jews. So it’s important to remember, Nou saysnoo

Ibraheem Nounoo, the head of the Jewish community in Bahrain, said he hoped there would be a regular minyan (min. 10 men) in the synagogue so they could perform prayers.

– If we have diplomatic relations and there are both Jewish people at the embassy and at the US base – I think we will have enough minyans to pray regularly in the synagogue. But more importantly, for the sake of our holidays, I think it would be good to have rabbis here and celebrate the holidays with us, says Ibraheem Nounoo

Paul Packer who is chairman of the US Commission on the Preservation of US Heritage in abroad, led an impromptu prayer in connection with the new month of the Jewish calendar, along with Ibraheem Nounoo and Israeli security guards.

Relations between Israel and the Emirates are also getting closer and closer.

The first commercial flight of the emirate airline Etihad from Abu Dhabi to Tel Aviv landed in Israel today :

See the reaction of the Palestinians when an emirate delegation visited the Al Aqsa Mosque in Jerusalem :

Emirates’ response to the Palestinians: – Thanks to G_d that Jerusalem is in Israeli hands: