Yoseph Haddad by commemorative for fallen Israeli Arab soldiers: – IDF is for all Israelis

Apr 15, 2021 Arabere and Israel, IDF and security services, IDF operations, Israeli Arabs, No nos, Ohel Said, the terror war against Israel., Together - Vouch for each Other, Yoseph Haddad, Yusuf Yahya 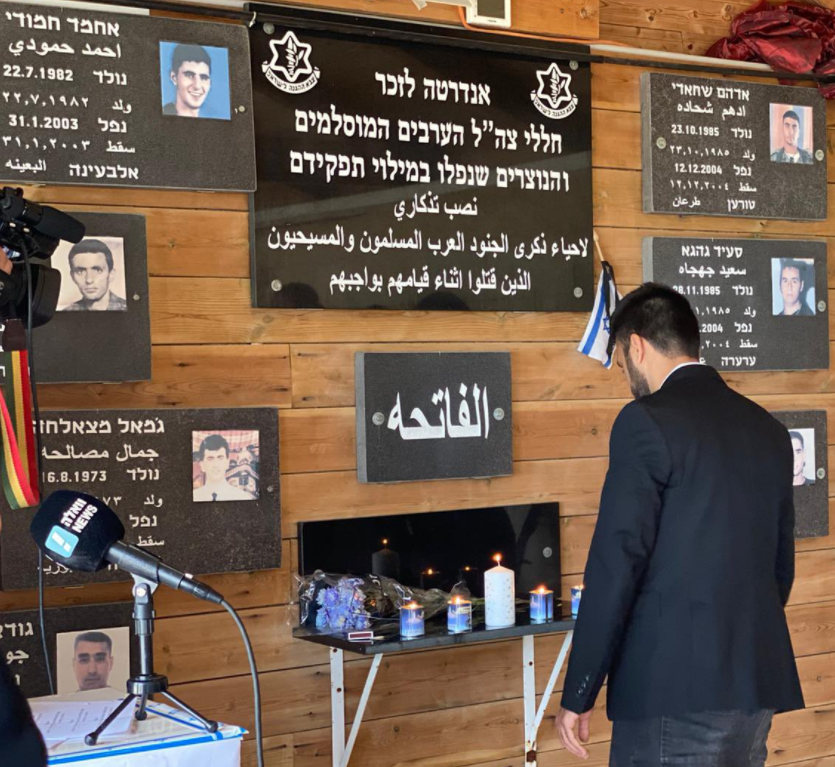 Yesterday was held a very special memorial in the village of Arara for fallen Israeli Arabic soldiers in the Israeli army, the article is translated from Hebrew from Israeli news media Walla News.

Memorial was arranged by the organization Together – Vouch for Each Other, operated by Yoseph Haddad, who itself is Arabic-Israele and the handicap after he was injured as Israeli soldier – read more about the organization here.

The memorial is called Ohel Said (Said Tent) and is located on a hill overlooking Wadi Ara. The memorial was listed by Yusuf Yahya, who lost his 19-year-old son Said Yahya during an operation in the Gaza Strip.

– in memory of the boys – Muslim IDF soldiers who fell under the tunnel disaster in Rafah in 2004.
At the entry of the memorial, the names of the Arab soldiers who fell in Rafah are engraved in Hebrew and Arabic, as well as: “Mother and daddy do not cry, Said tent – equality and peace.”

“There is not a day when a left father does not think of his son,” explains Yahya who is determined to continue his son’s path. He believes that the Arabs in Israel should volunteer for military service after the events of Wadi Ara in 2000. Yahya says he sent his sons to IDF to change Israeli Jews’ prejudices about Wadi Ara and disseminate the message that all Israeli inhabitants should serve and protect the country as they live in.

Said left parents, five brothers – ihab, Muhammad, Ahmad, Hisham Walid and two sisters – Rozit and Angam. Since Israel’s creation in 1948, about 150 Arab-Israeli fall in war. Today, about a thousand soldiers from the Arabic sector in the Israeli army.

At the ceremony also spoke Major (res.) Hisham Abu Reya, the first Arab-Muslim officer in IDF. He stressed that “in their death they commanded us peace”.

– IDF is not the Jews army, IDF is Israel’s defense army who is set in the world to protect all Israelis. Just as IDF belongs to us all, Mind Day for fallen Israeli soldiers too. We paid the ultimate price together and will remember every soldier together, Haddad “said.

– It is very touched to hold the memorial day in Arab society and honor the memory of Israeli-Arab fallen soldiers along with all fallen Israeli soldiers and terrorist victims. It is a sad and painful day for the entire Israeli community. We all need to bend your head and remember our heroes who fell for our country. We must be together and be united. Honor be their memory must Allah have mercy against their soul, added Haddad.

Israeli Arabs: – Those who say there are apartheid in Israel should be ashamed