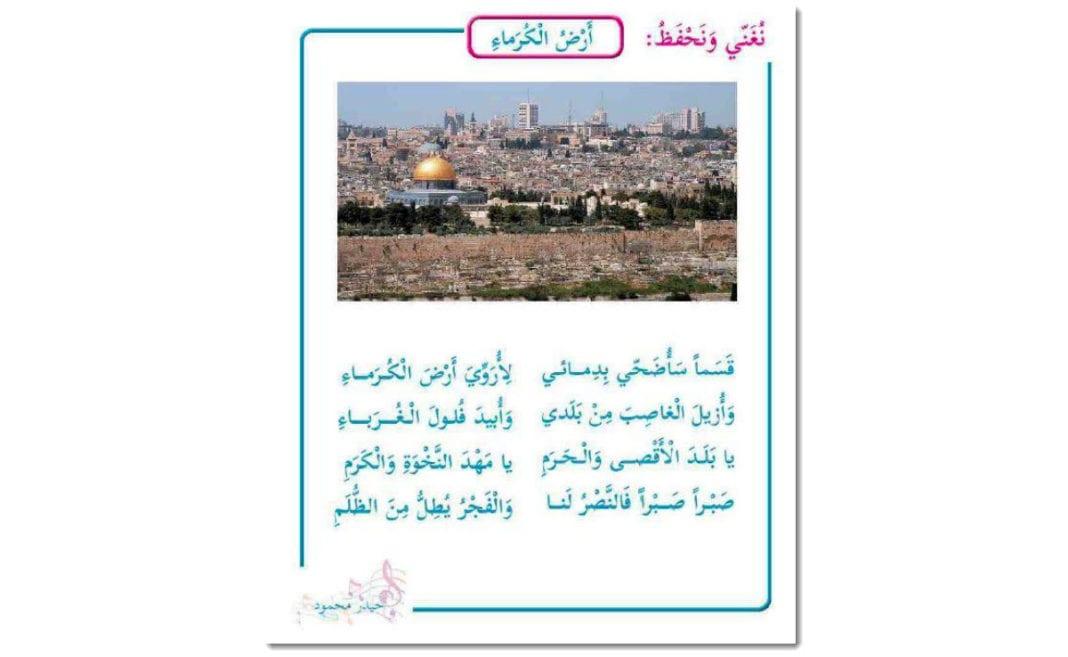 The discussion about Palestinian jihad textbooks urging Palestinian children to blow themselves up, become martyrs and murder Israelis has been going on for several years. Infinitum News has repeatedly drawn attention to the fact that school books are becoming more and more extreme, yet Denmark, among others, has continued to send several million. Danish tax dollars to the Palestinian Authority (PA), which could continue to poison the brains of Palestinian children undisturbed. Now it seems that the IMPACT-se reports are making the EU wake up. Here is the background:

After IMPACT-se and Infinitum News informed Storting politicians in Norway about the case, Aftenposten followed up with an article on the front page on 12 November 2019: Norway supports school curriculum that promotes jihad. The editorial was also clear in the speech: Palestinian textbooks oppose peace.

5. December 2019 became a historic day: For the first time in history, a majority in the Storting threatened to freeze Norwegian aid to the Palestinian Authority (PA) if the PA did not change the curriculum in their textbooks. In May, Norway was joined by the EU, which expressed concern “over the continuing lack of effective action against hate speech and violence in school textbooks” – read MIFF’s article on this. On 4 June 2020, Norwegian Foreign Minister Ine Eriksen Søreide stated that the government has “withheld more than half of the planned support for Palestinian education ».

MIFF calls on the Danish government to follow Norway and the EU
On 5 December 2019, Infinitum News called on the Danish government to follow in the footsteps of Norway and the EU – read MIFF’s article on this. Unfortunately, this has not happened and Danish tax dollars continue to fund the training of Palestinian children in hatred and jihad – read MIFF’s articles on this.

PA textbooks in 2020-2021
During the summer, the Palestinian Authority (PA) signaled to its aid countries that they would reform their school curriculum. “We feel that there is a good and close dialogue with the Palestinian education authorities on the issue,” the Norwegian Foreign Minister wrote to the Storting on 4 June.

But now the summer holidays are over, the school books for autumn 2020 have been distributed to Palestinian students and made available online – see more here, here it turns out that the changes are minimal when it comes to problematic content, and partly for the worse . IMPACT-se, an institute that examines different countries’ school curricula against UNESCO’s standards for peace and tolerance in education, sums it up as follows:

The majority of the few positive changes are about gender equality. Another positive change is that students are asked to find three Islamic hadiths which are about being kind to their neighbors.

Now it finally looks like the EU is waking up!

On 7 October 2020, more than 20 MEPs from 15 countries called on the EU to partially withhold funding for the Palestinian Authority (PA) textbooks, as long as the PA uses the school system to turn Palestinian schoolchildren into terrorists. themselves in the air, become martyrs and murder Israelis. Read the full letter to EU High Representative for Foreign Affairs and Security Policy / Vice-President of the EU Commission Josep Borrell Fontelles and EU Commissioner for Neighborhood and Enlargement Oliver Varhelyi.

In the letter, EU parliamentarians refer to IMPACT-se’s latest report (see further up in the article for more info). The EU parliamentarians are affiliated with the interparliamentary group Transatlantic Friends of Israel (TFI). In the open letter, they have asked the EU executive to suspend cooperation with the Georg Eckert Institute. In 2019, the German institute was tasked with analyzing the Palestinian textbooks, but their report contains several serious errors. The report, which has cost over 220,000 euros, erroneously praised the PA for improvements in textbooks for peace and tolerance. The error occurred because the institute had included textbooks from the City of Jerusalem in the report. In other words, the researchers had erroneously included Israeli textbooks as if they were PA’s Palestinian textbooks. The initial review of the Palestinian school curriculum was also conducted by the Georg Eckert Institute. The report was riddled with translation errors from Arabic and showed a clear lack of insight and understanding of Palestinian culture.

In the letter to the EU, the EU parliamentarians emphasize IMPACT-se’s report, which states, among other things:
– The Palestinian Authority (PA) textbooks are riddled with disturbing anti-Semitic content and imagery, hate speech and incitement to violence, martyrdom and jihad across all grades and subjects. The textbooks are prepared by and used by officials and teachers in the education system – their salaries are financed by the EU’s PEGASE instrument. They violate ALL UNESCO standards for peace, tolerance and coexistence in the school system. In order to promote peace and stop harmful incitement to violence and terrorism, we propose that the Commission withhold 5% of aid to the Palestinians until the PA makes significant positive changes to their textbooks.

The Austrian EU parliamentarian Lukas Mandl, who is also the TFI’s President of the European Parliament, said:
– It is unacceptable for the EU to fund Palestinian textbooks that glorify terrorism and call for anti-Semitism. The call for terrorism by the Palestinian Authority (PA) is a major obstacle to achieving our common goal of negotiating a two-state solution. By putting a temporary, partial halt to aid to the PA, the PA will hopefully understand the message that the EU is serious in the fight against the glorification of terror, violence and all forms of anti-Semitism.

The German EU Parliamentariker Niclas Herbst who is also a TFI member and Vice-Chair of the European Parliament’s Committee on Budgets wrote:
– The European Parliament made it very clear in 2018 and again this year that we no longer want European taxpayers to finance teaching that glorifies anti-Semitism, hatred, or encourages terrorism and violence in Palestinian textbooks. Palestinian children deserve better. We are extremely concerned that changes were still not made to the new textbooks in September 2020. We are also concerned that the presentation of the EU interim report on the Palestinian school curriculum used incorrect textbooks, that the anti-Semitic content was ignored and that terror was justified. Something has gone terribly wrong in the research process and it needs to be put in order.

Following persistent pressure from IMPACT-se and Infinitum News in Norway, the Norwegian government (one of the PA’s major donor countries) announced earlier this year to the Palestinian Authority (PA) that it would withhold half of its payment to Ramallah’s education sector – to PA’s jihad textbooks were changed for the better. In May 2019, the European Parliament also condemned Ramallah’s failure to change the content of their jihad textbooks and the Commission’s discharge report in 2018 insisted that the Commission ensure that EU funds go only to promote peace and tolerance in Palestinian schools.

Daniel Schwammenthal, Head of AJC’s EU Office in Brussels, AJC Transatlantic Institute and TFI Secretary General added:
– An EU that stands for a peaceful two-state solution must also clearly distance itself from the misuse of EU funds to poison the brains of Palestinian children.

Regarding the European Commission’s cooperation with the Georg Eckert Institute, legislators from four major political groups, including the three largest:
– In view of the Georg Eckert Institute’s deep concern and erroneous preliminary review of the Palestinian textbooks, it is inconceivable that the Institute’s final report, which will be published in December, could in any way reflect a serious and scientific assessment of the textbooks.

As mentioned earlier, IMPACT-se’s latest report on the Palestinian Authority’s (PA) latest textbooks for 2020-2021 showed that there were virtually no positive changes in the school curriculum – despite the fact that the Palestinian Prime Minister and Minister of Education had committed itself to making significant changes to the curriculum of Palestinian children.

Marcus Sheff as CEO of IMPACT-se says about the letter:
– The initiative has only collected some of the hundreds of Members of the European Parliament who, by a large majority back in April, voted to condemn the hatred, anti-Semitism and incitement to terror and violence in Palestinian textbooks.

The salaries of teachers who write and teach from those textbooks , are paid by European taxpayers. So it is no wonder that lawmakers are frustrated when researchers at an institute that has produced a very expensive commission report on Palestinian textbooks ignore the content of anti-Semitism, terror and violence and instead describe terrorism as ‘resistance’ and use Israeli textbooks to praise Palestinian curriculum.

The last word on the Palestinian Authority’s (PA) complete ignorance of European officials demanding that the contents of textbooks be changed has not yet been said. The EU was promised that there would be changes in the curriculum. Subsequently, it has shown that the new curriculum is as permeated by hatred as before.