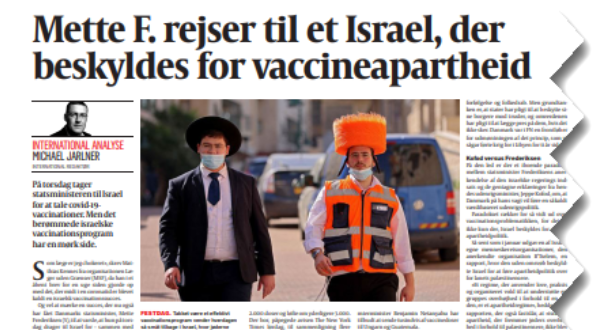 On November 18, 2020 wrote Chairman of Danish Palestinian Friendship Association (DPV), Fathi El-Abed, among other things, that “Israel’s blockade stifles all life in Gaza,” in a chronic Ipoliken.
November 19, Infinitum News made a Fathi El-Abed’s description of Gaza and corrected DPV’s raw anti-Israeli propaganda. Infinitum News asked the policy to print our answer, but got no! Sadly, but not surprising. Read more here.

On February 18, Infinitum News could tell that Politiken refused to bring Israel’s ViceAmbassador reply to raw anti-Israeli propaganda brought in the newspaper on 8 February. Read MIFF article about this.

Today it happened again!
How to wrote Israel’s Ambassador, Benny Dagan on Facebook:

Politiken today continues his evil campaign against Israel’s successful vaccine rollout. The newspaper exhibits bad journalism and judgment: No Israeli official was asked to be the groundless charges against Israel, and no official Israeli spokesman is quoted on the content of today’s article!

Read the article in Politiken here.

You can already figure out why it happens: Politiken tries to mislead his readers and hide the truth as it did, as during February published false information that Israel prevented the vaccination of Palestinian prisoners. Publishing our undeniable answer to the lie was rejected and was first published two weeks later!
in today’s article Hidden Politiken Facts that have been reported extensively in international media: All citizens of Israel, Jews, Arabs, Muslims, Christians are included in the national vaccine program; Israeli and Palestinian prisoners have been vaccinated, including Palestinian terrorists who have murdered Israeli civilians; Tens of thousands of Palestinians in East Jerusalem (defined by Politiken as occupied) are vaccinated, although most are not Israeli citizens; More than a hundred thousands of Palestinian workers will be vaccinated over the next few days in a special campaign after a high-level meeting in Ramallah 2 weeks ago between Israeli and Palestinian teams, and finally facilitates Israel delivery of vaccines to Palestinians in Gaza and West Bank delivered by third party.

In fact, Israel has already vaccinated several Palestinians than any other country (and millions of Palestinians in Arab countries and elsewhere).

Further to all works Israel hard in cooperation with other countries, including Denmark to increase vaccine production to address the global vaccine shortage and guarantee maximum supply that can help meet the need not only for its own population.

There is a good reason The policy has refrained from a professional coverage of the topic: Facts and honest reporting would frustrate its conscious attempts for the demonization of Israel.
good to see that other Danish media cover r the subject in an objective and professional manner!

* Translated from English by MIFF.