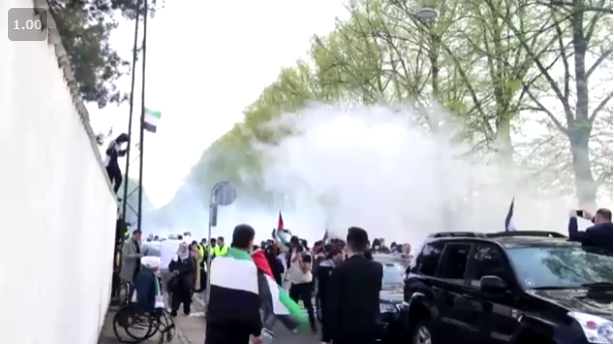 While the rocket from Gaza continues across Israel, an anti-Israeli demonstration with about 4000 protesters in front of Israel’s Embassy in Hellerup, developed violent, reports TV2 and Dr.

Copenhagen Police said to TV2:
– Among the protesters, there was a larger group of microplants who started throwing stone and cannon stroke on both the embassy and the police, and we therefore had to apply gas and spell against them. It is our efforts manager’s assessment that there were about 4000 people present at the demonstration. At the same time, our assessment is that between 50 and 100 people participated in the troubles.

To dr says police inspector Pau Kaltoft:
– They make a mushroom against the patrols we have placed in front of the embassy. It entails extensive disorder and we use gas and spells to bring it to an end.

– There are three to four police officers who are hit to stone, but they have not earned seriously. We have also destroyed three to four patrol wagons.

– We try to find out who they are, and then they will be charged with violence against the police or stone’s throw against the embassy. We have previously been successful in getting people made responsible for similar episodes.

At present there have been no arrests.

The case is updated.