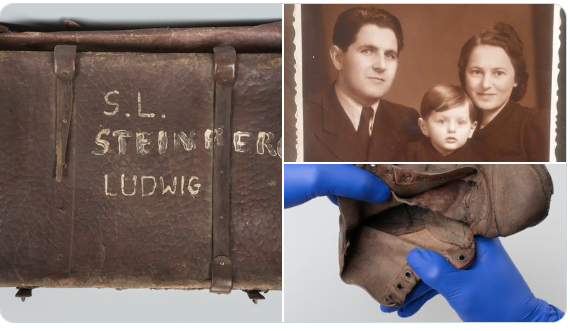 After extraordinary detective work in the Auschwitz Museum, a suitcase has been attached to a children’s shoe which in July was identified as belonging to a little boy named Amos Steinberg – read MIFF’s article about the touching find of the children’s shoe here. According to the museum, the suitcase almost certainly belonged to the boy’s father – and he survived the Holocaust. It writes the newspaper Times of Israel.


Amos Steinberg was born in Prague on June 26, 1938. On August 10, 1942, Amos, his father Ludwig and his mother Ida were first imprisoned in Theresienstadt and then deported from Czechoslovakia to the Auschwitz-Birkenau death camp in Poland.

Documents show that mother and son arrived at the concentration camp on October 4, 1944 and were probably murdered the same day in the gas chamber.

Researchers believe that Ida Steinberg wrote the note in her son’s shoes to show who it belonged to.

But the family was divided in Theresienstadt, and Ludwig was apparently sent to the Auschwitz-Birkenau death camp on an earlier transport.

– We know he was transferred from Auschwitz to Dachau on October 10, 1944. He was liberated in the Kaufering sub-camp. So six days after his wife and son were murdered, Ludwig was still “treated” in the Nazi system, says a spokesman for the museum.

This summer, members of the Steinberg family, who live in Israel, contacted the Auschwitz Museum. The family sent more information and family photographs to the museum.

Ludwig Steinberg changed his name to Yehuda Shinan and emigrated to Israel in 1949. He was a teacher and principal at several schools in Israel. He was much appreciated and both students and teachers were happy for him. He still loved music and was a cantor in several synagogues. He also conducted choirs. He died in 1985. His second wife, Chana, whom he had met before the war in Prague, died in 2014. They had six grandchildren and 14 great-grandchildren.

The connection between Amos’ shoes and the family’s terrible fate was not easy. clear up. The case was already in the museum’s collection, and documentation showed that at least two men named Ludwig or Ludvik Steinberg had been prisoners in the Auschwitz-Birkenau death camp.

The numbers 541 on Ludwig’s suitcase were almost invisible to the naked eye. Using infrared technology, researchers were able to decipher what was written and thus determine that it was the number that Amos was registered with on the transport list for the Theresienstadt Ghetto. Coupled with the material in the case and the date when the Steinberg family had arrived at the Auschwitz-Birkenau death camp, has led the museum to conclude that the suitcase belonged to Amo’s father.


– I am deeply grateful to the Steinberg family for the information they have given us and for supplementing our knowledge. With that gesture, objects associated with the Auschwitz-Birkenau death camp are no longer anonymous, names and faces are put on them and thus they take on a deeper and more individual meaning, says the director of the Auschwitz Museum, Dr. Piotr Cywinski.

– As an object of great documentary value, the shoe is evidence of a particular person’s suffering and, along with thousands of other objects that we preserve at the Auschwitz-Birkenau Museum, is further evidence of the genocide that took place here.


The plan is now to move the suitcase with Ludwig Steinberg’s name to the museum’s main exhibition – and the guides in the death camp Auschwitz-Birkenau will also be told the heartbreaking connection between a father’s suitcase and his murdered son’s little shoes, so they can convey the story to the museum’s Guests. Read more about the history on the museum’s website here.