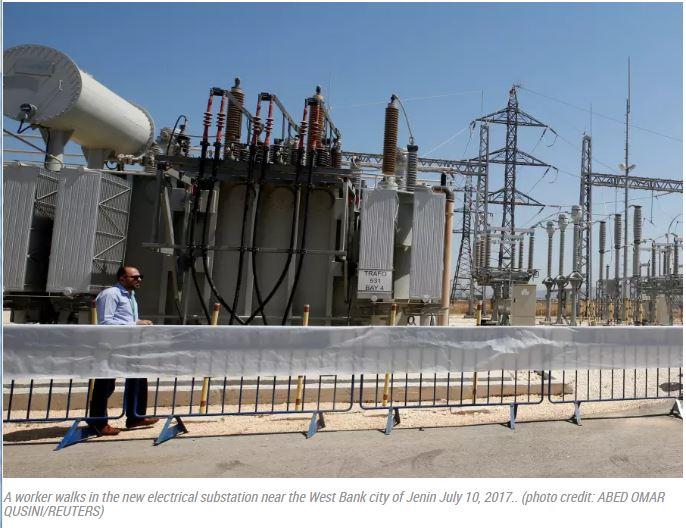 Most of the three million Palestinians living in the West Bank get their electricity from Israel, except for a small area around Jericho, which is dependent on power from Jordan, according to Reuters. But now Israel’s public electricity supply, Israel Electric Corporation (IEC), is to transfer a large part of the West Bank’s power supply to the Palestinian Authority (PA).

A 15-year agreement worth NIS 2.8 billion ($ 775 million) has been signed, which is a step towards giving the Palestinians more autonomy over their affairs.

Palestinian officials said the deal would allow Palestinians to regain more control over their affairs and infrastructure.

“The deal … frees the Palestinian electricity sector from complete Israeli control that has lasted for decades,” Hussein Al-Sheikh, head of the PA’s civilian agency, was quoted as saying by Reuters.

On the Israeli side, Energy Minister Yuval Steinitz said the Palestinians will now be able to more easily upgrade their outdated electricity grids and take responsibility for their own affairs. “With the signing of the agreement, we will be able to move forward with the Palestinians in developing a modern electricity grid based on the model of the secondary station we inaugurated in Jenin,” he said, referring to a meeting last year he held in Jenin with Palestinian Prime Minister Rami Hamdallah.

The agreement implies that PA must repay NIS 915 million to IEC. It includes both collateral and a credit guarantee mechanism, unlike previous agreements that fell apart as Israel and the PA quarreled with each other over repayments.

The IEC has previously faced difficulties in getting some Palestinian customers to pay their debts, but the Israeli Supreme Court forbids the IEC to completely stop the power supply to these customers, according to Globes Business Daily.

“The agreement creates a new reality in the Palestinian energy sector, it reduces power supply constraints and strengthens economic stability,” Finance Minister Shai Badad said in a statement. “The fair payment for the electricity supplied to the Palestinians opens a new era in economic relations between the parties.”

Finance Minister Moshe Kahlon praised the deal, saying it was a “historic step” that could lead to further diplomatic breakthroughs between Israel and the Palestinians. “Strengthening economic cooperation between Israel and the PA is first and foremost an Israeli security interest,” Kahlon said. “The agreement will secure future payments to the IEC and strengthen its financial strength. I congratulate the negotiating teams on completing the mission.”

The agreement is the result of three years of negotiations between Kahlon and Hamdallah, including with the participation of the Israeli Army Department of the West Bank (COGAT), the Palestinian Minister of Civil Affairs, the IEC and the PETC.

ISRAEL TO SHIFT POWER SUPPLY TO PA IN $ 775M DEAL. Found via Good News from Israel, Newsletter 2018-05-20 . Retold in Danish by Dina Grossman with assistance from Google Translate and Jane Hoffmann.

If you want to keep up to date with the really good news from Israel in Danish, have a look at Good News From Israel – you can subscribe to a weekly newsletter.

In the future, MIFF Denmark will try to come out faster with the good news. Three weeks is a long time to wait!