May 26, 2021 anti-Semitism, As Neem, Balfour declaration., Dr. Mordechai Kedar, Hamas, Jews escape from Arab countries, media coverage, Media war against Israel., Natasha Hausdorff, NRK, The association of Jewish people to his home country, the terror war against Israel., To use the law possdetis 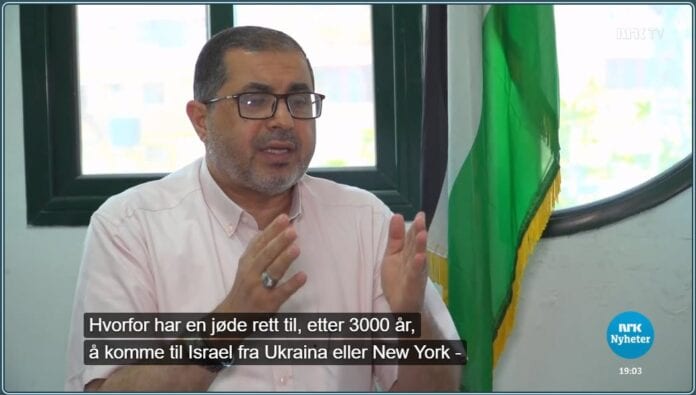 The fact that the Jews have been treated as strangers over several centuries where they lived, mean that they have a greater need for their state than other communities. We see the same dynamics repeated again now in May 2021: In several countries, Islamists and Hamas as well as Palestinians left-oriented support players are resorted to verbal and violent attacks on Jews. Let’s take New York as an example, now that Hamas’ spokesman himself mentioned the American big city, several Jews have been attacked on a purely anti-Semitic basis. Nothing testifies more clear that the Jews must have their own state than the escalating anti-Semitism we see in the world – also in Denmark.

b) In continuation of it: The Jews were frozen out and partly directly hunted out of the entire Arab world. Enter them also entitled to a country that is always open to them in the former Arab area. Again: It was largely Hamas’ ideological support players who drive the Jews out of the Arab world.

c) Through their religion, the Jews has much stronger affiliation with their country than other people have for theirs. It is therefore natural that the country they may have, the ancient countries of the fellow. The requirement is strengthened by the fact that the Jews have become equally well treated as foreign in the Holy Rural in the Arab world in general.

Norwegians, Danes on many others have moved to different countries over the past centuries – most of them to the United States. End Two-three generations are the real Americans. They know their Norwegian or Danish roots “, maybe they can say” red pure with cream “, maybe they travel on holiday in Norway / Denmark. But the United States is their home country, these are those belonging to. As time goes and new generations grow up, the bands are weakened to Norway and Denmark – it is a natural development.

The Jews were away from their home country for centuries (it must be emphasized that Jews have always lived in Israel – many Israelis are native “Tzabarim” through generations). The Jews have tried everything – ranging from Ghetto and Shttler (Yiddish: small town) where they stayed to their religion to completely in Germany in the 1920s and 30s (we see the same in Denmark – Most Danish Jews are today “Culture Jews”). Unfortunately, we know what happened to the Jews in Germany and the rest of Europe – a large proportion of Europe’s Jews ended up as the gas chambers. The Jews have always been discriminated and pursued outside their own country.

The Jews therefore have a much stronger affiliation with their own country than any other people have. The Jews are generation after generation treated as strangers regardless of which country they have lived in. It is Norwegians, Danes and others have not become.

The history of Jews in Europe and in Arab countries shows that the Jews must have a state where they can be free, manage their own destiny and live a Jewish life without being pursued. It is the reason why the Jews have received and must have, a small area (Israel is the size of Jutland).

The Oriental Jews, which for several thousand years had lived in the Arab world, amounted to approx. 2% of the population in the Arabic area. Small Israel’s area amounts to 0.2% of the Arab area. The Jews have not received too much.

All in all, the above arguments, in our opinion, Israel has a very solid foundation in relation to what is fair.

What about descendants of Palestinian refugees?

Of all the major refugee groups in the decades after World War II, it is only the Palestinians who continue to sit in “camps”. The refugees first got relief, and then it was a matter of new permanent settlement in the area they were fled to or in a third country.

The same would solve the problem for the Palestinians. They must either settle and get all rights in the Arab countries where they are scattered, in a hearing palestine state or in the third country. Å Pleie Dere Flyching Status, So Norway finances the gjennom UN, do not help to solve NOE problem.

Read: Supports the Arab countries Actually Palestinians? – There are several reasons why neither the Arab world nor the Palestinians will have a state – why kill “refugees” goose that put gold eggs? Writes Dr. Mordechai Bedar.

Rupert Colville, former spokesman for the UN High Commissioner for Refugees, has presented three fundamental arguments against “the right to return”. Here, the principles of the Palestinians are used:

1) The time that has passed. According to the United Nations and the EU there has been too long to return to Cyprus since 1974. In the cases of the Palestinians, 26 years have gone more than in Cyprus.

2) continues the original ethnic conflict – yes as we can see it to a great extent.

3) Are new inhabitants moved into the area? Jewish refugees – largely from Arab countries took over the properties like the Palestinians left.

As we can see, the Palestinians according to the above criteria have long lost every right to “return”. All ethnic refugees lose the right to return after some years – long before 73 years have gone as is the case with the Palestinians. The crucial argument that speaks against “The right to return” for Palestinian refugees is that it will mean that the only Jewish state in the world will disappear and the Jewish people will again become an oppressed minority over everything in the world.

Read MIFF’s timeline over the history of Jewish people (4,000 years from Abraham to Netanyahu) incl. Overview of the Balfour Declaration of 1917 where the Jewish people’s historical right to the country is recognized internationally

International law The conflict between Israel and the neighbors Хамас

Over 5000 support review of NRK presenter