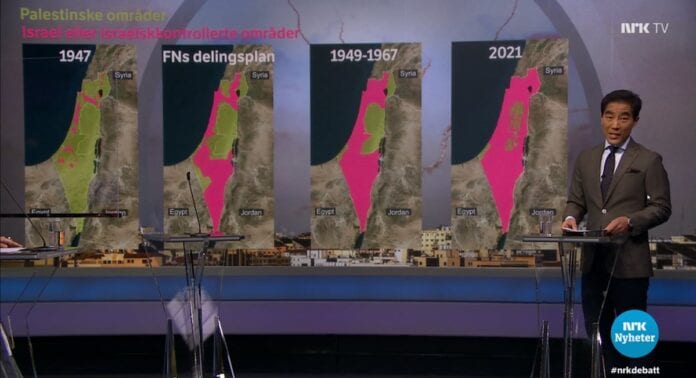 On May 19, the conflict between the Israelis and the Palestinians was the theme of the NRK debate (corresponding to DR). Program leader Fredrik Solvang had invited several young people into the studio to illuminate the war who has raged since May 10. In addition, researchers attended Marte Heian-Engdal and Cecilie Hellestveit. Line Khateb from Palestinakomite and Conrad Myrland from Infinitum News entered the last minutes.

Solvang probably put internal NRC record last night. Never before has so many different pro-Israeli votes received talk time in a 45 minute debate program. He deserves he praise for.

Solvang does not deserve praise for his use of cards. Fortunately, he gave Infinitum News some talk time to criticize the cards, but there was much more to say than have been given by time.

In 2012, Infinitum News explained carefully what errors are with the cards in the article when NRK uses card that lies. See card version and corrective map below

– Last Thursday, in an attempt to talk about the coherence of current unrest in the Middle East, we showed a series of short of changing geography in the region. We understood after we walked in the air that the cards were not actually correct and we regret that we used them, Snow said.

– I wish I had responded right away when I saw them, said NBC’s Middle East correspondent Martin Fletcher.

– The first card showed the area as if it were a Palestinian state. The word over the card was “Palestine”. It looked like it was filled with Arabs. And then the next cards showed fewer and fewer, smaller and smaller country from card to cards. Overall, it went completely wrong. It was no state called Palestine. In 1946 it was a British mandate area. The UK got control of the area of ​​the Published Board. At that time, it was about half a million Jews and a million Arabs in the area. The card should at least have reflected the demographic reality. And it gave the wrong impression, said Fletcher.

May 25, 2021
Denmark and Israel Media war against Israel.

Confusion in the Broadcast Council