No money for hate? – Read about the death cult of the Palestinian Authority (PA)… which is also cultivated in the textbooks of the PA and the UNRWA Refugee Agency 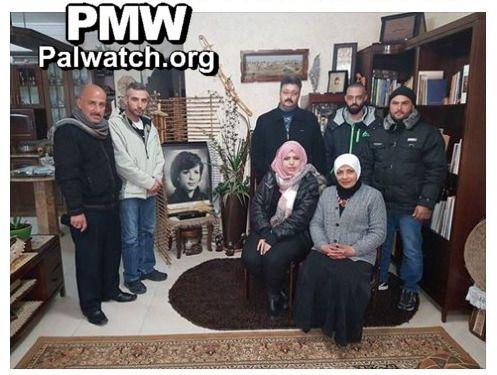 Itamar Marcus is the director of Palestinian Media Watch (PMW). He writes in the Jerusalem Post on October 24, 2018:

If you want to understand why Palestinian youths think they should strive to kill Israelis, you can just look at a chapter in one of their textbooks.

The Palestinian Authority textbooks – which are also used in UNRWA schools – have been criticized for many years, not least since PMW wrote a report on them in 1988. Despite many updates, some of them for the better , are the latest textbooks among the very worst. And it is one chapter that is completely unique in the way it openly promotes terrorism. This chapter, which appears in a fifth-grade Arabic language textbook, can serve as a window into the deeply distorted values ​​of the Self-Government.

The beginning of the chapter is innocent. It underscores the importance of heroes for national identity and national pride. “Heroes hold an important position in every nation – the people – even if it is divided on many issues – everyone is proud of their heroes”

Then the chapter continues by teaching students that the feeling of pride is not enough. Society does a lot to honor the heroes… “praises them in song and speech, learns from their life story, names our children after them, and names streets, squares and places of great cultural value after them.”

In short: Society ensures that the heroes are never forgotten, no matter how long ago it is that they have lived.

So far so good – no problems there! But the devil lies in the details. The book lists 10 heroes that children are encouraged to emulate. The list includes no scientists, no doctors, no engineers, no singers, no athletes, no artists. There have been three Muslim Nobel Prize winners in science, and two in literature, but none of them are on the list of heroes. So who is on the list? They are 10 Muslim combatants from the beginning of Islam 1400 years ago even today. The most extreme is shown the terrorist, the mass murderer Dalal Mughrabi.

Mughrabi was the leader of a team of terrorists who hijacked a bus in 1978. A total of 37-38 civilians were killed, including 12-13 children (the numbers are still uncertain to this day); and there were 71 wounded. Of the 11 perpetrators, 9 were killed. According to the education system, Mughrabi, a child killer, is someone that everyone should strive to emulate – a role model.

After the presentation of the list, the book continues by emphasizing that there are no better people than these warriors. “These heroes are the crown of the nation, a symbol of the nation’s glorious glory, they are the best of the best, the most noble of all noble people.”

And this is not exhaustive for the gruesome. Mughrabi was among those killed during the attack – and others on the hero list were killed in combat. Self-government textbooks focus on their death and glorify their willingness to die. “They took life in their own hands and threw themselves at the dangers without losing their determination and surrendering. Some died as martyrs, some died on the way to fulfill their duty, as heroes ”.

As if it was not scary enough for the kids to be encouraged to kill! Self-government teaching materials tell them that “heroes” are willing to die – without fear – as martyrs. The chapter ends with an admonition about what it means for them if they do not want to act like a hero: “All praise to the heroes, all shame to the cowards”.

It is tragic and frightening that the presentation of Dalal Mughrabi as a hero and role model is not at all random or unique. It is part of a comprehensive worship of Mughrabi – ruled by the Palestinian Authority (PA).

The cult-like worship of murderers is a foundation of the corrupting set of values ​​that Palestinian leaders have promoted since the coalition PLO (Palestine Liberation Organization) was formed in 1964, and which has been part of PA indoctrination of Palestinian children since 1994. [According to Brittanica, Fatah became informal formed in the late 1950s, and by the end of the 1960s became the dominant faction in the PLO.]

It is not surprising that so many of the Palestinian terrorists have been teenagers – including the killer of the Israeli-American Ari Fuld, father of four, [while shopping at a center used by residents of both Israel and the Self-Government areas]. For several decades, the Palestinian leadership has been bastioning the message “Kill an Israeli – become a hero”. And it looks like Palestinian children have been listening well.

Here is the choice that is instilled in the children’s thoughts when they study one of the worst chapters in their textbooks:

If you were an impressionable child, which path would you choose?

The new Danish criteria for support for NGOs grew out of an embarrassing revelation in May 2017: One of the NGOs we had supported – ‘Women’s Affairs Technical Committee’ (WATC) – had approved the naming of a women’s center after – yes , who else? Dalal Mughrabi.

Is it not time that the new Danish criteria for support for NGOs are also applied to the Self-Government and UNRWA?

Itamar Marcus is the director of Palestinian Media Watch. He represented Israel in negotiations with the Self-Government on incitement to hatred (see, among other things, the article on miff.dk: “The eerie price of the Oslo war”. Together with (the Dane) Nan Jacques Zilberdik, he has written “Deception: Betraying the Peace Process”

Retold from “ One of the worst chapters in Palestinian schoolbooks “, Itamar Marcus October 24, 2018

The picture is from PMW on March 5, 2017, by the article “PLO names children’s camp after terrorist who murdered 37- ‘Brothers of Dalal’ youth camp is a project of the PLO Supreme Council for Youth and Sports, headed by Fatah Central Committee Secretary Jibril Rajoub. ” Photo caption: “ Organizers of the camp pose beside photo of terrorist Dalal Mughrabi”

Additional information – in English – about the textbooks:

Palestinian Authority textbooks and the lessons they teach- How have the Oslo Accords been implemented as far as education for peace is concerned? A research study exposes the truth. David Bedein, Center for Near East Policy Research. 10 July 2018 Arutz Sheva7. The article provides a nice introduction to two articles in “Israel Behind the News”:

Israel, Jews and Peace in the New PA Textbooks Used in UNRWA Schools Today – Final Study . Arnon Groiss, Ph.D. and MPA 6 June 2018 – with a link to a 40-page report on The Meir Amit Intelligence and Terrorism Information Center ”. Arnon Groiss worked for Israel’s Arabic radio for 40 years, reporting daily on Middle Eastern and Arab conditions. Since 2000, he has examined more than a thousand textbooks from Egypt, Syria, Saudi Arabia, Iran, Tunisia, and the Palestinian Authority.

New Palestinian Textbooks ‘Indoctrinate for Death and Martyrdom,’ Report Says – The report, by the Institute for Monitoring Peace and Cultural Tolerance in School Education, analyzed K-12 textbooks that were published in the past few years during the PA’s first curriculum revamp since 2000. 24 September. Haaretz.