Skip to content
Denmark and Israel Norway and Israel 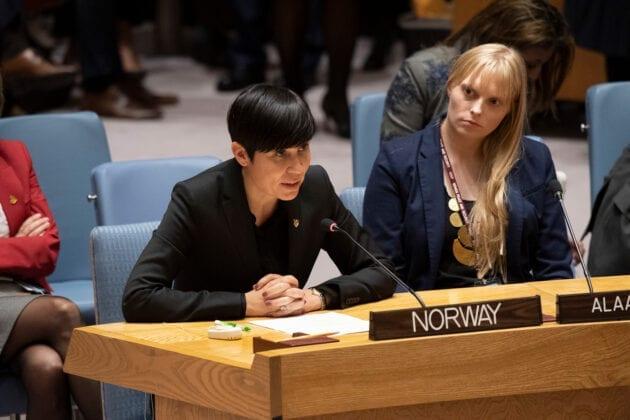 Norway has joined the UN Security Council. On January 8, the Norwegian Ministry of Foreign Affairs announced in a press release that Norway will lead a working group for children in armed conflict.

«Protection of civilians, including children, will be one of the Government’s main priorities in the two years Norway will sit on the Security Council. Children are particularly vulnerable when it comes to abuse during armed conflict.

– I welcome the opportunity to lead the important working group on children and armed conflict. The management profession provides a good opportunity to contribute to increased responsibility in the area, says Eriksen Søreide. »

In November 2019, Palestinian radio broadcast a feature in which children were encouraged to sacrifice themselves in martyrdom. They are Islam’s “ammunition and weapon to liberate and conquer Jerusalem.” The feature was also shared on Facebook by the Fatah movement, which controls the Palestinian Authority. Read more HERE.

The Palestinian Authority and Hamas have a shared responsibility
The Palestinian Authority (PA) and Hamas cannot be absolved of the responsibility they have in the use of children in the fight against Israel – whether the children are scouts, messengers, stone-throwers, riflemen or suicide bombers. Much of the incitement of Palestinian minor children to violence is funded by the Palestinian Authority or other public institutions and media. Danish and Norwegian authorities and organizations are therefore both directly and indirectly responsible. “Children have the right to be protected from being harmed and abused, physically and mentally,” the UN Convention on the Protection of Children states. Therefore, it should be a primary task for parents and society to prevent children from participating in riots and confrontations that are known to be potentially violent. International law prohibits non-state armed groups from recruiting or using children under the age of 18 – read more HERE
. Several of the militant Palestinian groups are violating the provisions of international law on a daily basis. Those who have not seen pictures and films from the militant children’s camps in Palestinian society should take a look at YouTube – click HERE to see more.

Norway has cut 30 million. NOK in aid to the Palestinian Authority
The Palestinian textbooks used in the 2019-2020 school year were much more extreme than before. Violence, martyrdom and jihad is a recurring theme in the children’s school curriculum during all twelve years of schooling in Palestinian primary schools, wrote Infinitum News on October 9, 2019 – read more HERE. Infinitum News also translated 44 examples into Norwegian and Danish which documented it – read more HERE.

September 2020 Infinitum News Naser Khader’s comments in the newspaper Kristeligt Dagblad about jihad in Palestinian schoolbooks. Khader is a member of the Folketing for the Conservative People’s Party, chairman of the Defense Committee, a member of the Employment Committee, the Legal Affairs Committee and the Foreign Affairs Committee. In addition, Khader has a Syrian-Palestinian background and has an in-depth knowledge of what is going on in Palestinian society. Read more here.

Here are excerpts from Khader’s comments:

– For the past 20 years, the organization IMPACT-SE has been dealing with teaching materials in the Middle East and North Africa. The starting point is that the teaching material is crucial for preventing hatred, extremism and violence. The experience is that children and young people are radicalized through teaching materials.

– Where things are really bad is in the Palestinian territories. Around the year 2006, the teaching material was revised in a more peaceful direction, but in recent years, when the Islamist organization Hamas’ ideology in particular has become widespread, it has left its mark on the textbooks. For example, it is good to be a martyr and to be rewarded with virgins. That, I think, is infinitely sad.

– But what can you do about it? Americans are trying to act on these setbacks. At the moment, Congress and the White House are looking at HR-2343, a “bill” to monitor the development of Palestinian teaching materials. And it must have financial consequences.

Read MIFF’s call to the Danish government for continued assistance to PA’s extreme textbooks: Denmark should do as Norway – make demands on PA to change course or close the coffers.

Read MIFF’s articles on how the Palestinian Authority (PA) uses Danish aid to educate children in hatred and death here.

Read MIFF’s article on the more than 20 EU parliamentarians in an open letter to the EU: – Stop funding PA jihad textbooks.

​​ MIFF needs your help to continue the information work for Israel.
By joining Infinitum News and recommending us to family and friends, you help ensure we can continue that work.
Click HERE to join
.