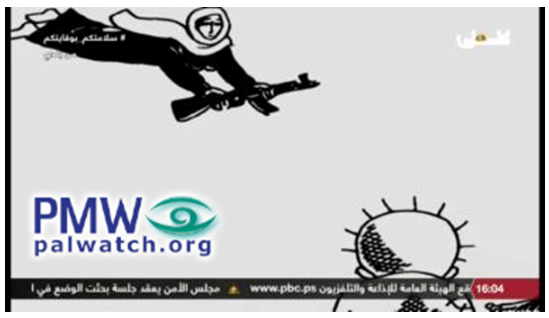 A children’s program on the Palestinian Authority’s official TV channel, a channel sponsored by Danish and Norwegian aid funds, showed in a tribute to the late cartoonist Naji Al-Ali a series of cartoons that promote violence, writes Palestinian Media Watch, which translates Palestinian media.

Read MIFF’s articles on how Danish aid to the Palestinians is being misused for terror against Israelis here.

Al-Ali is known for creating the cartoon character Handala, a boy who symbolizes Palestinian refugees, and the woman Fatima. One of the drawings shows Fatima offering an AK47 automatic weapon to Handala.

Another drawing that was shown in the children’s program shows Fatima with roots growing in the ground under her dress, where she distributes stones to children – also Handala. To the right of the drawing you see a young girl throwing a stone at an Israeli / Jew, who is illustrated with a big nose and the Star of David on his hat. The person is trying to protect his head.

A girl who speaks in the program while the drawings are shown explains that Fatima symbolizes the strong Palestinian women:

Naji [Al-Ali] sacrificed the character Handala, who was regularly in his cartoons and REPRESENTS a 10-year-old boy illustrated with his back to the readers. Naji also had another character who REGULARLY appeared in his drawings in the form of a Palestinian woman whom Naji called Fatima. She is the character who is not humiliated. She has a clear vision of the conflict and how to resolve it.

Other cartoons by Al-Ali, which were shown in the children’s program, depict Israeli soldiers with long noses, afraid of stone-throwing Palestinian children. The girl who speaks also says that «the Israeli soldiers have a long nose».

The Israeli soldiers have a long nose and are in most cases confused in the encounter with stone-throwing children. The soldier is naughty and evil with opportunistic leaders.