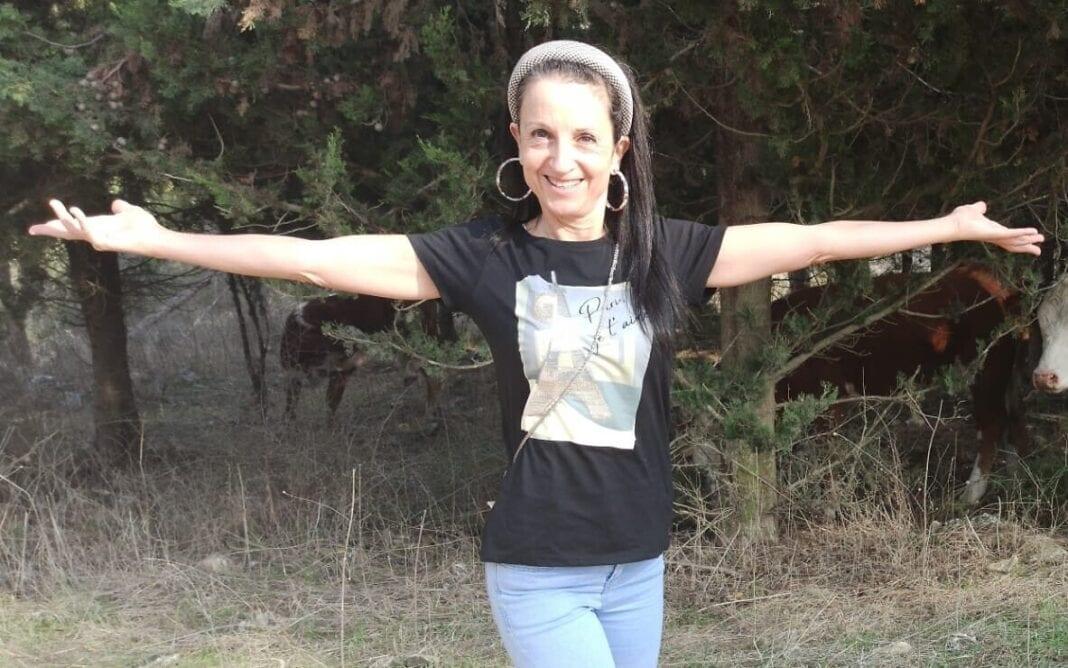 On December 21, 2020, the Israeli mother of six, Esther Horgan, was found brutally murdered near the settlement of Tal Menashe in the West Bank (Judea and Samaria). 52-year-old Esther was taken out on one of her regular runs in the area, but this time she never came home – read MIFF’s article about it HERE. After a major search operation, she was found murdered in the woods with major head injuries.

Read also:
Child killers have been paid over 2.3 million. kroner in reward, incl. payout table – the more human lives on the conscience, the more money.

Esther’s killer wanted revenge for convicted terrorist with multiple lives on conscience
The Palestinian terrorist who murdered Esther told during his interrogation that he “decided to carry out a terrorist attack because a security prisoner he knew , Kamal Abu Wa’er, ”died in an Israeli prison of cancer. [Israeli Security Services, Israeli Government Press Office, January 4, 2021], writes Palestinian Media Watch PMW) which has been monitoring Palestinian media for several years.

Palestinian terrorist Kamal Abu Wa’er was sentenced to 6 life sentences for his involvement to the murder of at least 4 Israelis. While Abu Wa’ers were ill, the Palestinian Authority (PA) and Fatah launched incitement campaigns in which Palestinian Authority officials made false accusations that Israel was denying Abu Wa’s proper medical treatment. After Abu Wa’s died of cancer, PA and Fatah intensified their anti-Israel propaganda, calling his death “deliberate medical negligence.” Mohammed Kabha who murdered Esther believed in PA propaganda and decided to murder an Israeli in revenge. Kabha has stated that he “identified a Jewish woman walking alone” in the woods while Kabha was smuggling cigarettes through a hole in the security fence. He went to Esther, smashed her head with a stone and killed her.

PA spreads Nazi-like accusations against Israel
PA does what it can to demonize Israel and spread hatred against Israel among the Palestinians. PA by spreading false and demonizing allegations against Israel is an effective propaganda tactic. The PA likes to portray imprisoned Palestinian terrorists with Israeli lives on their conscience as some poor people whom Israel treats inhumanely. For years, the PA has claimed that Israel “tortures” terrorist prisoners, exposes them to medical experiments instead of treating them for their diseases, the PA even claims that Israel performs Nazi-like experiments on them, infects them with diseases, exposes them to medical neglect and denies them treatment for serious illness – such as cancer and causes their “slow death”.

Here are selected quotes from the Palestinian top:

Palestinian Prime Minister Muhammad Shtayyeh hailed the terrorist Abu Wa as “a warrior and a pure-hearted son of Palestine”, while the PA prime minister accused the Israeli prison system of being responsible for his death by “deliberate medical negligence”:

”[PA] Prime Minister Muhammad Shtayyeh… said: ‘We comfort ourselves, our people and the martyr [Kamal Abu Waers] family with our loss of a warrior and a pure-hearted son of Palestine, who sacrificed his freedom for the sake of the freedom of his people and his homeland. ‘He added:’ We hold the occupation responsible for Abu Waers’ death as a martyr due to the deliberate medical neglect of our prisoners by the prison management. ‘”

The head of the Commission on Prison Affairs, Qadri Abu Bakr, accused Israel of “premeditated murder”:

”Director of the [PLO] Commission on Prison Affairs, Qadri Abu Bakr, accused the occupation (i.e.
. Israel) to assassinate the Abu Wa’er prisoner, by abandoning him as a prey to cancer… he added that the medical crime against the martyr prisoner Abu Wa’er is a testament to the racism and anger felt by the occupation and its efforts to harm our prisoner in every way.

Abu Bakr holds the occupying government fully responsible for the crime, which was committed with the intent of the [Israeli] prison system, which knew the severity of the prisoner Abu Ware’s health condition, necessitating his immediate release.

”Member of the PLO Executive Committee [and head of the PLO Department of Diplomacy and Public Policy] Hanan Ashrawi said death as the martyr and cancer patient prisoner Kamal Abu Wa’s suffered as a result of deliberate medical malpractice are evidence of the serious situation in the occupation prisons, the serious situation in Israeli detention centers, the various types of torture suffered by the prisoners, and the fact that they receive barbaric and cruel treatment from those responsible in prisons. ”

International Red Cross: – There is NO apartheid in Israel
In 2017, Jacques De Maio, chair of the International Committee of the Red Cross in Israel and the Palestinian Authority (PA), denied the allegations about apartheid in Israel or in the West Bank (Judea and Samaria). The black campaign against Israel as an apartheid state began already during the Cold War and has been going on since then. It should be taken seriously when the world’s largest aid organization takes a stand against the false accusations against Israel.

– The Red Cross has in-depth knowledge of the apartheid regime in South Africa – of all those who accuse Israel of the same thing: No, there is no apartheid in Israel. There is no regime that believes in a superior race or denies one group of people fundamental human rights based on alleged inferiority. There is a bloody national conflict where the most prominent and tragic is a years-long occupation. But there is no apartheid, De Maio said in an interview with the newspaper Yediot Ahronot.

It’s not every day that the Red Cross boss gives interviews to the media, but when he does, it’s because he has something on his mind. The International Committee of the Red Cross has a budget of more than 12 billion. kroner and 16,000 employees. 85% of the budget is funded by the states of the world, while the rest comes from international organizations and private donors. The Red Cross aims to be a neutral party in conflicts.

Red Cross denies false accusations against the Israeli army (IDF)
In addition to dismissing the apartheid accusation against Israel, the Red Cross chief also denies false accusations that the Israeli army (IDF) has a standing order to shoot and kill suspected terrorists, as certain political elements have tried to convince them. The organization has conducted several interviews to uncover whether there were any allegations against Israel.

– Unlike security authorities in many other countries, including several Western countries, Israel gives us quick access to senior military officials, prisons and other security services. We have a productive, efficient and professional dialogue with them,
says De Maio, who repeatedly boasts of the openness of the Israeli authorities.

– The Red Cross is not occupied by Israel. I do not doubt and say in a clear voice that I reject comparisons and parallels between the situation here and the one we see in Somalia, Sudan, Yemen and countless other conflicts in the world. What we do not want to do, however, is give them [Israel] permission to continue in control of another people and we will not be a scapegoat. Not theirs, not the Palestinians’ or anyone else’s. We do not work for states or regimes, we work for people, De Maio explains.

Norway is putting pressure on the PA by cutting 30 million. NOK in Norwegian aid
In December 2020, the Norwegian government decided during their budget agreement between the government and the Progress Party to cut 30 million Norwegian kroner in support of the Palestinians in the state budget for 2021 – read more here. Norway’s reduction in development assistance is in addition to a general reduction in development assistance due to the expected decline in gross domestic product in the wake of the Corona crisis. It was a wish of both the FRP party and the governing parties to use the cut in aid to the Palestinian Authority (PA) as a means of pressure to stop, among other things, the reward system for convicted Palestinian terrorists with Israeli lives on conscience and jihadist education in schools where Palestinians school children are encouraged to sacrifice their lives in jihad against Israelis (read more HERE).

He went on to emphasize that the reduction in Norwegian aid will not cause the Palestinian Authority to change its school curriculum.

– Jerusalem is the capital of the state of Palestine in school curriculum, in politics, in economics, in society and among the people. If some donors make demands on us in this regard, we will fund the printing of our school books with our tax revenues for water, telephone and electricity, if any. We want a national curriculum that reflects our reality and our vision for the future, reflects scientific and technological progress, strengthens our endurance and reflects our society in the spirit of a pluralistic and democratic approach, Shtayyeh declared.

MIFF has for years pointed out that demands must be made of PA before disbursement of aid
The Prime Minister’s statement illustrates what Infinitum News has pointed out for several years – as long as Norway, Denmark and other donor countries, provides general budget support to the Palestinians, they can move around the money as they please, and claim that Norwegian and Danish funds do not help finance what Norwegian leaders find worrying. Unlike the Norwegian leaders, the Danish leaders are silent, the only exception Infinitum News is aware of is Naser Khader who is a member of the Folketing for the Conservative People’s Party, in addition he is chairman of the Defense Committee and a member of the Employment Committee, the Legal Affairs Committee and the Foreign Affairs Committee. In September, Khader in Kristeligt Dagblad expressed concern about the PA’s abuse of Palestinian schoolchildren by training them to become suicide bombers. Khader himself is a Palestinian with a Syrian background, which is why he knows PA’s thinking – read more HERE. Infinitum News already wrote in 2013 that PA is just playing a game for the gallery – read more HERE in Norwegian.