PA: – The Holocaust was Europe’s revenge on the evil of the Jews 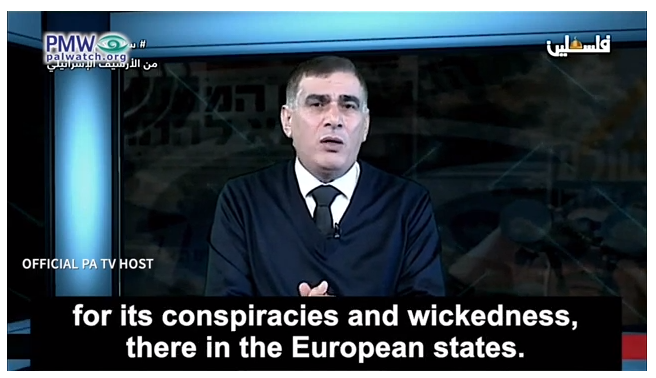 While the rest of the world today marks International Holocaust Remembrance Day by honoring and commemorating the 6 million Jews who fell victim to the atrocities of the Nazis and their henchmen, the Palestinian Authority (PA) is using this very day to blacken the victims of the Holocaust. for the tax crowns of Danes and other countries. Watch the clip HERE.

In a program on the PA-TV channel, the host said, among other things, that the Holocaust was Europe’s revenge on the evil of the Jews.

PA TV host: “In this episode” Hitler’s road to power in Germany “, we talk about the period 1929-1935. It was a period when Zionism diminished and almost disappeared… The preparations led to World War II in Europe, and it was during this period that the Zionist movement paid the price for its conspiracies and evil in European countries. ”

The program on PA-TV once again underscores the Palestinian Authority’s (PA) gross anti-Semitic attacks on Israel and the Jewish people, which the Palestinian Media Watch PMW has documented for several years – read more HERE.

President Mahmoud Abbas, who is also the chairman of the PA, has stated that for centuries Europeans committed massacres against Jews “every 10-15 years” and that it culminated in the Holocaust as a reaction to Jewish behavior. Abbas’ justifies anti-Semitism by saying that “hatred of the Jews is not due to their religion, but to their social role, which was linked to exploitation, banks, etc.”

The Abbas’ Fatah movement has released a propaganda video claiming that the Jews themselves are to blame for the anti-Semitism. The Jews are presented as an evil and threatening force that the Europeans had to defend themselves against: the Jews “led the project to enslave humanity” and allied themselves with the Nazis and burned Jews “to get their fingers in wealth.” The Jews themselves established “ghettos to differentiate themselves from other people of arrogance and disgust for non-Jews.” The clip claims that the Jews who were forced by the Nazis to live in ghettos, in fact, themselves chose to do so, to conspire against non-Jews and that this led to European anti-Semitism: “[Jews] were hated because of their racism and their dirty behavior. “

Not only is Abbas spreading anti-Semitism, so are several senior PA officials. Mahmoud Al-Habbash, appointed by Abbas as the PA’s Islamic adviser, has stated that the Palestinians’ conflict with Israel is Islam’s historical conflict against Jews who are Satan’s allies, spreading evil and lies. And that Israel, as a Jewish state, is “Satan’s project.”

The religious figure whom Abbas has appointed to be the leader of the entire Palestinian school system has stated that Jews are responsible for all conflicts on earth and at sea: “Humanity will never live in peace, gain wealth or peace, as long as they are destroying the land. …. If a fish in the sea fights with another fish, I’m sure the Jews are behind it. ” According to the PA, the existence of the Jews is a fundamental threat to all of humanity
. Read MIFF’s articles on PA’s jihad textbooks HERE.

The PA has even claimed that the Jewish threat to humanity can only be stopped by exterminating all Jews. A religious figure has read a Hadith from the Koran on PA-TV: “The malignant [Jewish] genes and cursed traits continue in them. They pass them on from generation to generation. They inherit it from father to son…. Mankind will never be able to live with them… Our Prophet [Muhammad] told us [that] at the end of time the Muslims will fight against the Jews… Jews are hiding behind a rock or a tree and the rock or the tree will say: ‘Muslim, servant of Allah, who is a Jew behind me, come and kill him’…. Allah… count them and kill them one by one and do not leave one behind. “ (Same Hadith was recited in mosque in Copenhagen in 2017).

The PA’s years of demonization of Jews have a major impact on the Palestinians. According to the Anti Defamation League (ADL) Global 100 survey, 87% of Palestinians believe that “People hate Jews because of their behavior.” The vote also showed that the Palestinians are the most anti-Semitic population in the world.

Read more about ADL’s investigators of anti-Semitism in Denmark HERE.

It’s crazy claims like the one above that are the reason Infinitum News is working to speak out on Israel’s case .
Watch MIFF’s YouTube clip on why it’s so important for YOU to join MIFF as well.
Click HERE to join.
Thanks for sharing and thanks for your support.