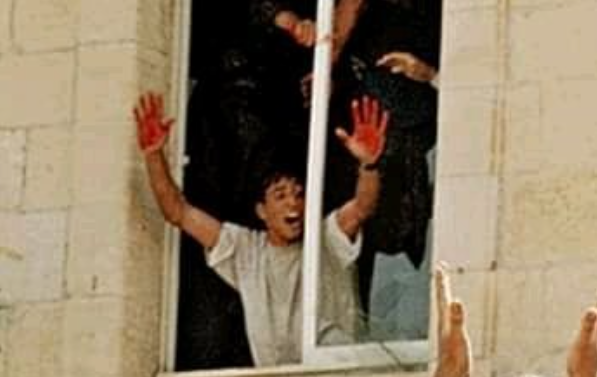 On October 12, 2000, the two IDF reservists Vadim Norzhich and Yosef Avrahami were lynched by a large Palestinian crowd. It happened while they were detained at the el-Bireh police station in the city of Ramallah which is under PA control. The two IDF reservists had entered Ramallah by mistake, the Jerusalem Post writes.

PA subsequently paid terrorist pay to 15 of the killers. Read MIFF’s articles on how Danish aid is being misused by PA to pay terror pay to convicted terrorists with Israelis’ lives on their conscience here.

See also how PA pays tribute to 3 terrorists who participated in the lynching of the two Israelis:

The lynching was the starting shot of the very violent Second Intifada after the collapse of the Israeli-Palestinian negotiations in Camp David. The lynching in October 2000 is among the most brutal events in history in the relationship between the Israelis and the Palestinians. The lynching also became one of the first mass political violent events of the Internet age to go viral in Israel and in the world.

It all started after the two IDF reservists Vadim Norzhich and Yosef Avrahami drove in their civilian car to a meeting place at the Jewish settlement of Beit El. The two Israelis did not know the area or roads in the West Bank, they were driving through a military checkpoint outside Beitunia. From there, they accidentally drove into the Palestinian city of Ramallah (under PA control).

When they came to a Palestinian roadblock, they were detained by PA police and taken to the local police station in Ramallah’s twin town of el-Bireh, close to the now-deceased PLO chief Yasser Arafat’s headquarters. The detention of the two Israeli reservists took place at the same time as the burial of some Palestinians who had been shot by the IDF.

There were quick rumors that Israeli undercover agents had been detained at the police station and over 1,000 Palestinians gathered and demanded that the two Israeli men be killed. Meanwhile, the Israeli intelligence service was informed that the reservists had been detained and that a crowd had gathered. The IDF reportedly decided not to launch a rescue operation because there were PA security forces in the area. The sister newspapers Haaretz and Maariv, which are Jerusalem Post’s sister newspapers, reported that 13 Palestinian policemen were injured as they tried to prevent the crowd from storming the police station and lynching the Israelis.

IDF reservists were kicked and stabbed to death by the crowd, an Italian news agency took the infamous photo of Abdel Aziz Salha (who is today a free man) showing his bloody hands in the window to the cheers of the crowd. The bodies of the reservists were then thrown out of the window, mutilated and burned. The bodies were then pulled to Al-Manara Square in the city center. PA security forces, aware of the seriousness of what was happening, tried to confiscate films showing the lynching.

The video of the lynching shocked Israel and led to widespread military retaliation against PA targets in the West Bank and Gaza Strip, including attacks by Israeli Air Force Apache helicopters on the police station where the incident took place, the headquarters of the Fatah-affiliated Tanzim and the terrorist organization Al-Aqsa Martyr Brigadier. and the Voice of Palestine radio station.

The lynching was reportedly a landmark moment in Israeli-Palestinian relations and set the course for the next five years of violent suffering during the Second Intifada (2000-2005). The second Intifada cost more than 1,000 Israelis and 3,000 Palestinians their lives.