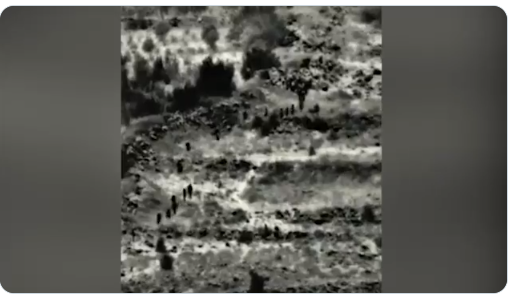 In a covert operation last week, Israeli army special forces crossed the border into the demilitarized zone between Israel and Syria and destroyed two outposts belonging to the Syrian army, the Israeli Channel 12 (N12) reported, reported in the Jerusalem Post newspaper.

The operation was carried out after Syria’s continued breach of the withdrawal agreement concluded between Israel and Syria in 1974. According to the agreement, there is a buffer zone between the borders which may only be occupied by a special UN force – Disengagement Observer Force (UNDOF )

Click to see part of the IDF’s secret operation in Syria:

Recently, the Syrian military returned to the buffer zone in the Golan Heights, spreading its forces across the border, prompting the IDF to intervene and launch the unusual operation. – a special unit specializing in combat technology. They crossed the border and destroyed two Syrian outposts without being detected.

– You face the enemy and you are about 500 meters away. Such a mission requires you to be very focused, Cap said. Michael Zilberg from the Nachal Brigade to the N12.

A team commander from Yahalom described the operation: – It is about coming quietly and covertly to the target, placing an explosive system on both outposts and blowing them up in the air at the same time.

Lieutenant Tal Goritzki of the Nachal Brigade explained the overall purpose of the mission in addition to “punishing” Syria for violating their agreement with Israel.

– We know about the cooperation between the Syrian army and Hezbollah. Any Syrian military company can develop the potential for a dual military establishment. “We will not allow southern Syria to become the new southern Lebanon,” Goritzki told the N12.

In recent years, the IDF has focused on preventing Hezbollah and Iran from establishing terrorist positions on the Syrian side of the Golan Heights, including air strikes against their positions.

Four rockets from Syria shot down