Skip to content
IDF and security services Technology and innovation

Can stop atomic bomb on its way to Israel 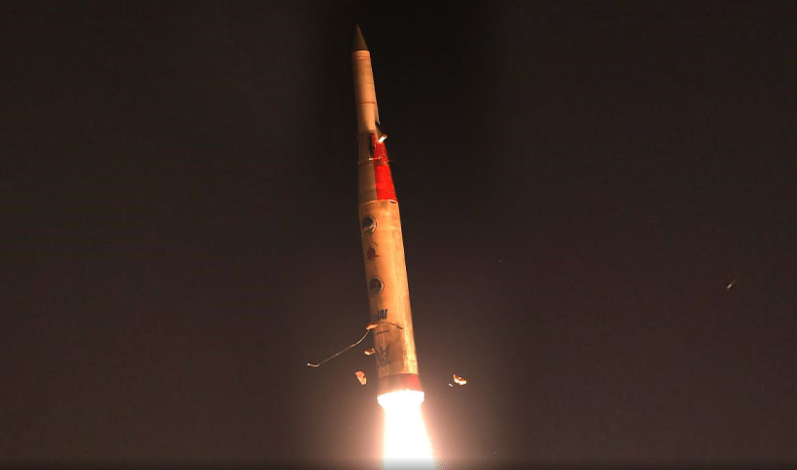 Israel, together with the US Missile Defense Agency (MDA), has successfully tested the Arrow-2 missile defense system. The system can intercept long-range missiles, the Israeli Ministry of Defense said in a statement. It writes the newspaper Jerusalem Post.

See the system in action here:

The system captured a target that simulated a long-range ground-to-ground missile – similar to the one Iran could fire at Israel. This applies to the second Shahab 3, which is a medium-range ballistic missile with an explosive warhead.

– The target simulated what our biggest enemy could attack us with, says Moshe Patel, head of the Israel Missile Defense Organization (IMDO ) in the Ministry of Defense.

The test was conducted at a test site in central Israel, led by Israel Aerospace Industries (IAI) with IMDO, part of the Directorate of Defense Research and Development (MAFAT in Hebrew), MDA and the Israeli Air Force.

The test was performed by IAF service members along with engineers involved in system development. The various layers of Israel’s air defense mechanism were used during the test to ensure their readiness and effectiveness.

Boaz Levi from IAI told reporters that “the test was perfect, all the systems worked as expected.”

The radar locked on to the target and followed it until it was intercepted and destroyed – exactly as planned.

According to Levy, the test simulated an incoming missile and simulated a threat.

During the test, the updated features of the system were confirmed, the Ministry of Defense said.

Prime Minister Benjamin Netanyahu congratulated and said that “we have once again proved that the state of Israel has the strongest and most advanced defense and attack capabilities in the world. I would like to express our deep gratitude to our American allies for the mutual progress made for our security. Our enemies and those who want to harm us know that the State of Israel is prepared for any threat. ”

– Israel must meet challenges from both near and far, and our ‘elite technology unit’ led by MAFAT, IAI and other defense industries ensures that we are always one step ahead of our enemies and can defend Israeli airspace against any threat, said Defense Minister Benny Gantz.

Patel told reporters that the target during the test was fired at Israel “from a considerable distance” and was stopped by the system.

Iran is the biggest missile threat to Israel, but the missile threat may also come from Iraq and Syria. The system can also handle threats from there, Patel said.

According to Patel, the threat from precision missiles and non-conventional weapons – such as nuclear weapons – is both increasing and serious. Arrow 2 and Arrow 3 can also stop nuclear missiles, says Patel.

– The system’s interceptor, radar, command and control systems have been upgraded over the years. The test took place 20 years after the system became operational. The system has undergone several major upgrades over the years to address the threats that Israel will face in the future, Levi said.

The Arrow-2 system was first used in 2017 when it stopped three ground-to-air missiles fired by the Syrian air force against Israeli air defense jets.

– The joint Israeli-American test reflects the partnership and friendship between the two countries and the United States’ deep commitment to Israel’s security. We will continue the collaboration to strengthen the defense capabilities in air, land, sea and cyberspace. Both systems demonstrated advanced operational capabilities. The integration of both systems into Israel’s air defense system expands and improves the state’s capacity to defend itself against current and future threats, says the Ministry of Defense.

Arrow 2, ARROW 3, David’s Sling and Iron Dome together form a multi-layered Israeli defense system. Together, the systems provide Israel with a protective umbrella capable of countering threats from both short- and medium-range missiles used by terrorist groups in Gaza, the terrorist organization Hezbollah, and the more sophisticated ballistic missiles from Iran.