Skip to content
Denmark and Israel Technology and innovation

Danish innovation center in Tel Aviv: – Danish companies could learn something from Israel 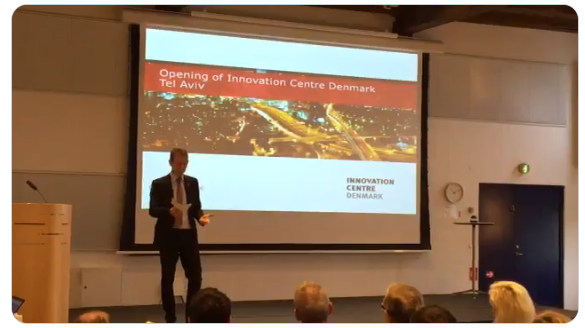 On December 10, Lasse Vinther-Grønning and Samuel Scheer who are Director and Innovation Adviser, Innovation Center Denmark, Tel Avivi wrote on Monday morning about what Denmark can learn from Israel.

The article is brought in its full length below:

Denmark’s food producers are in a global race to develop the food of the future that can ensure the large Danish agricultural exports, which today account for about 30 percent of the total exported value of goods.

It requires a constant and high-tech development effort throughout the chain from farm to fork.

A – perhaps a little surprising – place to seek answers on how to solve that challenge , is in Galilee.

For most readers, “Galilee” probably first and foremost brings to mind a rewind to Christian knowledge in elementary school. Jesus miraculously fed 5,000 people in Galilee with five barley loaves and two fish.

Galilee is located in the northern part of Israel, bordering Lebanon and Syria, and is one of the most fertile areas in Israel. With different climate zones, it is ideal for various agricultural activities.

But in exactly the same way as in several rural areas in Denmark, due to a lack of local jobs, there has been a constant migration of young people from the country to the cities in recent decades. . The result is classical depopulation and poor economy. Just like in Denmark.

About five years ago, things started to change. In Tel Aviv, Israel’s notorious entrepreneurial hub, more and more entrepreneurs realized that there were hitherto untapped opportunities in food innovation, and they began to raise local capital for what is today a booming innovation ecosystem for food tech in Galilee.

An example is Nutrilees, led by CEO Yaki Harel.Nutrileeshar has developed a recycling technology that transforms waste products from wine production into high quality food ingredients with a high nutritional value.

Last year, the company received a major million investment from IFF Frutarom, one of the three largest producers of food ingredients.

They are now in the process of integrating their highly nutritious wine ingredient into chocolate bars, snacks and other foods produced by multinational food brands, which will make it healthier for all of us to enjoy the sweet pleasures.

Another example is the promising start-upBluetree, has invented a unique technology to remove a large part of the sigh squeezed fruit juice, which makes fruit juice less fattening.

Bluetree has also made major investments through a consortium of local and international food companies and venture capital funds from both Israel and the United States.

An ecosystem of startups, universities and authorities
Not long after the first entrepreneurs, so to speak, “planted” startups on the Sea of ​​Galilee, global food tech companies began to flock to Israel to collaborate and invest in it. local ecosystem. Many of them either acquired local startups or established their own RD departments.

This was noticed by the local educational institutions, which saw an opportunity to create synergies with the food tech wave. The local college Tel Hai merged with, among others, one of the country’s leading investment funds, Jerusalem Venture Partners, and created an innovation alliance in the food sector.

Today, a thriving startup ecosystem has been created that has contributed to a future optimism in northernmost Israel
. The cornerstones of the thriving innovation ecosystem in food technology include:

A food tech incubator : The Israeli government has committed DKK 200 million in investment incentives to a privately run incubator that is operated ( albeit with reduced financial risk) by some of the leading venture capitalists and companies in Israel.

Startups joining the incubator receive investments of up to 10 million and gain access to testing facilities, business and technology guidance and follow-up investments.

The National Food Institute: The Government of Israel has also committed itself to setting up a Technology Maturity Institute to bridge the various existing academic institutions.

The department will facilitate the flow of knowledge between academia and industry, as well as provide a one-stop-shop for start-ups as well as local SMEs to produce sample products. In collaboration with the leaders of the ecosystem in Galilee, we at the Innovation Center have sought to inject Danish knowledge about food technology, and we have helped lay the foundation for Danish-Israeli cooperation in the food area.

Several Danish key players in the food innovation ecosystem have established strong ties to their respective colleagues in Israel, and over 20 Danish agrifood start-ups have been trained by Israeli serial entrepreneurs and venture capitalists.

Although we do not believe that the definitive answer on how to secure Danish food exports in future, can only be found in Galilee, then we are convinced that close innovation cooperation with global leaders such as those we find in Israel, is crucial for Danish food tech to remain relevant in the ever-increasing demand for new ingredients and new product categories.

The Ministry of Education and Research, together with ICDK Tel Aviv, has published an analysis of food tech in Israel. It can be found here.