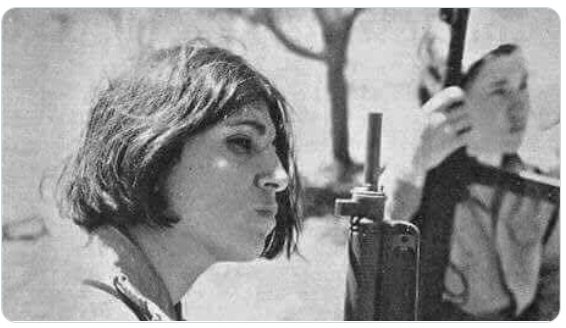 Palestinian terrorist Theresa Halsa was the last surviving member of the group Black September that hijacked Sabena plane 571 in 1972. Halsa died of cancer at the age of 65 in Jordan on Saturday, writes the Jerusalem Post.

Black September was also behind the Munich massacre of Israeli athletes during the Summer Olympics in Munich in 1972.

Halsa was the fourth member of the terrorist cell that hijacked the plane, which was led from Brussels via Vienna to Lod Airport – now Ben-Gurion Airport in Israel.

After taking control of the plane and its passengers, the group began negotiations for the release of several hundred Palestinian prisoners in Israeli prisons.

The Israeli Defense Forces (DF) sent Sayeret Matkal (Special Forces Unit) on a rescue mission. Among the soldiers in Sayeret Matkal was also current Prime Minister Benjamin Netanyahu. During the mission, Netanyahu was accidentally shot in the arm by his own force

Two terrorists, Ali Taha Abu Snina and Abed al-Aziz Atrash, died in the operation. Rima Tannous and Halsa were captured. One passenger was killed and the other passengers escaped unharmed.

The female terrorists were imprisoned and released in 1979 during a prisoner exchange.

Halsa never regretted his misdeeds and continued to pay homage to the armed Palestinian struggle against Israel until his death.

In Denmark, Theresa Halsa was hailed as a hero by the Danish Palestinian Friendship Association (PDV):

MIFF’s comments
The Danish Palestinian Friendship Association (DPV) should work for the Palestinians’ cause rather than pay tribute to Halsa as: “The legendary, Christian, Palestinian freedom fighter Thereza Halse” who neither regretted his wrongdoing nor preached for peace between Israel and the Palestinians. The DPV uses the same hateful rhetoric against Israel as the Palestinian media has done for several years.

As long as terrorists with Israeli lives on their consciences are hailed as heroes and Israel’s right to exist is not recognized, the prospect of peace between Israel and the Palestinians is not just around the corner.

Danish tax dollars help finance terrorist attacks against Israelis
As long as Danish aid to the Palestinians helps finance terrorist attacks against Israelis, the terrorist attacks will not stop. On Friday, Infinitum News wrote about the 18th anniversary of the most deadly attack during the Second Intifada. On March 27, 2002, a Palestinian terrorist, dressed as a woman, managed to smuggle powerful explosives into a hotel in Netanya. When the Hamas terrorist entered the dining room, he detonated the bomb. 30 civilians between the ages of 20 and 90 were killed, 20 were seriously injured and 120 were lightly injured, according to Wikipedia.

In May 2002, Abbas Al-Sayidar was arrested by Israeli forces. He was then convicted of planning the Easter massacre in Netanya plus an attack on a shopping mall in Netanya on May 19, 2002, in which five people were killed.

In the 18 years since then, Al-Sayid has been rewarded with $ 1.7 million by the Palestinian Authority, a financial reward several times higher than the average salary of Palestinian teachers and police in the same period. The terrorist’s current monthly salary is 13,600 kroner and will gradually increase to 22,700 kroner.

The Palestinians’ reward system for convicted terrorists with Israeli lives on their conscience is financed by Denmark, among other things, by our tax dollars – we are thus helping to pay for terrorist attacks against Israelis!

It is not the lack of a Palestinian state that is the problem, it is the Palestinians’ intense aversion to a Jewish state. The obstacle to a two-state solution for two peoples is that Fatah and the PLO, backed by a united Arab league, reject the idea that Israel should remain a Jewish state. The Arab League made this clear at its meeting on March 25, 2014. The adoption was unanimous: “Absolute and categorical refusal to recognize Israel as a Jewish state.”

Denmark’s official goals are two states – Israel and Palestine , living side by side in peace. But the organizations that receive hundreds of millions of kroner a year from Denmark have a serious and embarrassing problem: None of them know a Palestinian politician or community leader who publicly calls for the recognition of Israel as a national homeland for the Jewish people.

If you also think it’s time all Danish friends of Israel stand together and stand up for Israel and the Jewish people, sign up for Infinitum News right now! Because from only 160, – a year, you help Infinitum News to speak for Israel – together we are strong! Click here to become a member.