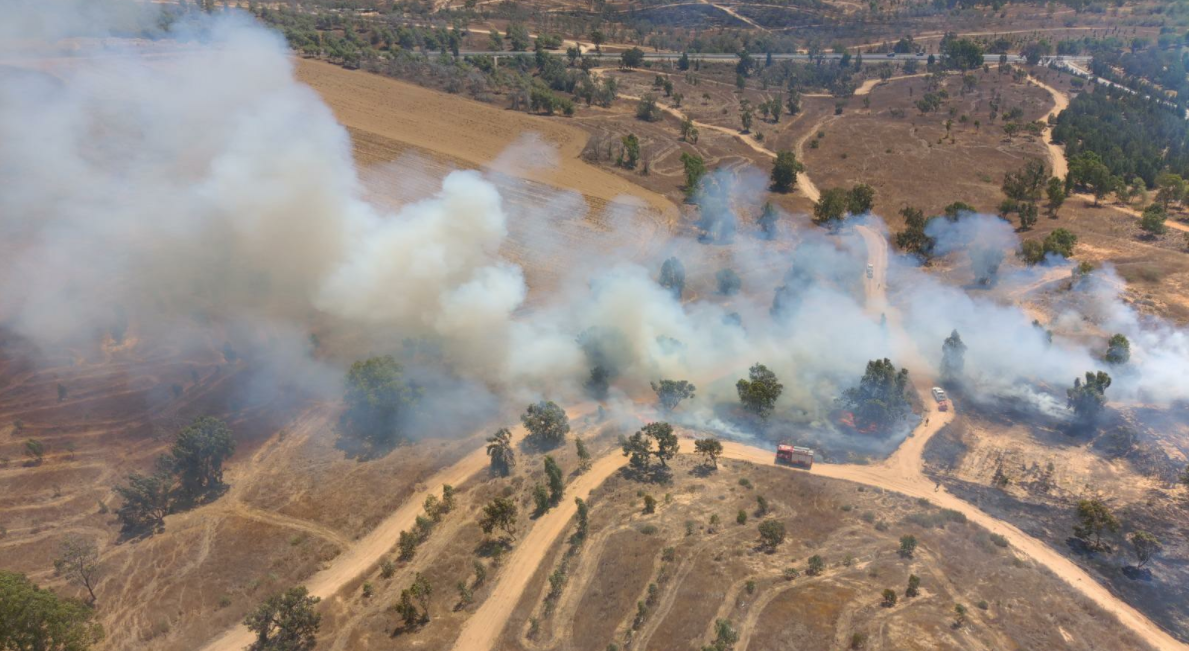 Israeli helicopters and tanks attacked at least three Hamas targets in the Gaza Strip early Wednesday in response to the many fuel balloons that alone caused more than 60 fires in Israel yesterday, the Israeli army (IDF) said. It writes the newspaper Times of Israel.

Read MIFF’s article on August 10 – where, among other things, three explosive balloons jumped over the Israeli city of Sderot, which is close to Gaza.

Explosives and burning materials attached to balloons, kites and the like were a new weapon used by the terrorists in the Gaza Strip in 2018. They have caused thousands of fires and major damage to agriculture, nature and wildlife – read MIFF’s article about it here in Norwegian.

The IDF states that it has hit the terrorist group Hamas’ “military base, underground infrastructure and observation posts.”

There were no reports of human injuries.

The IDF says the attacks come after last week’s many fuel balloon terrorist attacks against Israel. The IDF emphasizes that they hold the terrorist group Hamas, which also has control of the Gaza Strip, responsible for everything that happens in the enclave.

The IDF attacks came hours after Israeli leaders threatened Hamas that Israel would use “powerful” means if Hamas did not gain control of the many attacks on Israel.

Tensions at the border with Gaza have been rising recently. The terrorist group Hamas has also threatened to resume rocket attacks on Israel – read MIFF’s articles on this.

– In the south, Hamas allows explosive balloon attacks into Israel. We will not accept it and that is why we have closed the Kerem Shalom border. They are wise to stop the disturbance of security and ensure peace in Israel. If that does not happen, we will have to respond by force, “said Defense Minister Benny Gantz. . We will not suffer from it, we will act and demand a heavy price. We have done it before and we will do it now, said Prime Minister Benjamin Netanyahu.

According to the Times of Israel, the Prime Minister is referring to the Iran-backed terrorist organization Palestinian Islamic Jihad – read MIFF’s articles on the terrorist group here.

According to Israeli authorities, they have fought a major fire in the Eshkol region, which is close to the border with Gaza.. The fire forced authorities to evacuate several Bedouin families in the area.

As a consequence of the many fires, Israel announced on Monday that the Kerem Shalom border into Gaza will be closed and that only fuel and humanitarian aid will be available.

On Tuesday, Hamas’ closure of the border called for an aggressive act and a crime that the Jewish state “will bear all the consequences and consequences of.”

Hamas spokesman Fawzi Barhoun stated that “the use of such tools (terrorism) and the struggle to show his anger” is a natural result of Israel’s blockade of the Gaza Strip.

Gantz, who is also deputy prime minister and was IDF chief of staff during the Gaza war in 2014, has previously called for a tougher hand in deterring terrorist groups in the Gaza Strip from continuing terrorist attacks against Israel. Gantz has not specified what funds he believes should be used.

Gantz went through the work of setting up a command center to oversee the IDF’s fight to bring down the Corona infection. Read MIFF’s latest article on the Corona crisis in Israel here. The IDF has taken over responsibility for the epidemiological tracking and contact with those who have been in contact with the infected.

Leaders in communities close to the Gaza Strip have demanded that the Israeli government and IDF take steps to stop the terrorist attacks.

– We have no deterrent against Gaza. A Palestinian who wants to send explosive balloons into Israel should think 100 times before doing so, but he does not do so because he knows it will have no consequences, said Ofer Lieberman, director of agriculture at Kibbutz Nir Am near Gaza. threshold.

Israel has previously retaliated with airstrikes against explosive balloon terrorists, but according to the Times of Israel, it seems that the IDF, which is also on high security preparedness at the northern border with Lebanon, does not want an escalation of violence at the Gaza border. / p>

Recent tensions along the Gaza border are believed to be due to delays in the implementation of an ongoing ceasefire agreement between the terrorist group Hamas and the Israeli government.

According to reports on Tuesday, Israel is working to get Qatar to continue sending money to Gaza in an attempt to stop tensions with Hamas.