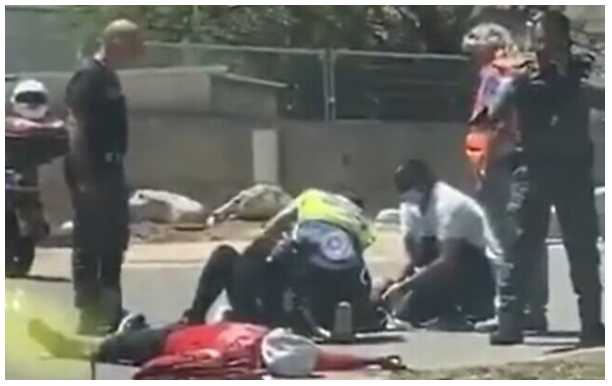 The 62-year-old woman was stabbed in a suspected terrorist attack in Kfar Saba next to shopping center G on Tuesday, just minutes before the national memorial service for fallen soldiers and victims of terror on Mount Herzl in Jerusalem, writes the Jerusalem Post.

The victim was treated by doctors from Magen David Adom (MDA) and paramedics on site. She is conscious and in moderate to severe condition. She is being treated at Meir Medical Center in Kfar Saba and was taken to the hospital’s trauma center.

Kfar Saba Municipality announced that there had been a knife attack on Weizman St. next to the industrial area and the shopping center G.

-When we arrived at the place, we saw a 62-year-old woman in full consciousness lying on the road. We conducted an initial examination and treated several bleeding stab wounds. We gave the woman life-saving treatment including stopping bleeding and quickly transferred her to the hospital, while we continued the treatment along the way and reported to the doctors who were waiting for us, said MDA paramedics, Elazar Habani

The suspected terrorist was shot and transferred ten the hospital in serious condition by ZAKA.

The Israeli police are investigating the incident.

The background to the incident is still unclear.