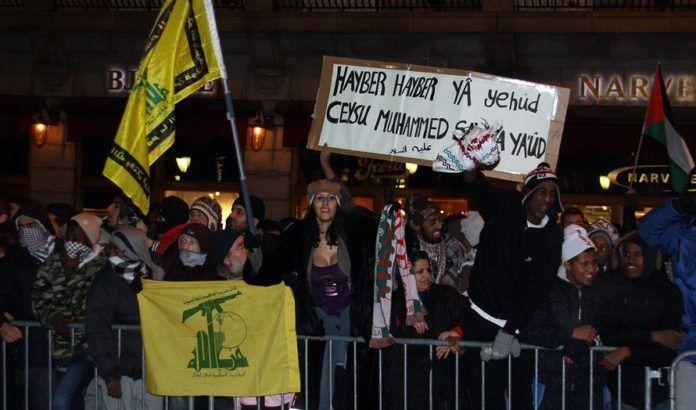 Fortunately, there was a strong showdown with anti-Semitism in Western Europe after the Nazis were defeated at the end of World War II. Today, “anti-Semitic” is one of the worst predicates you can give another human being.

In other parts of the world, this showdown has unfortunately never materialized.

If we look at Europe’s closest neighbors to the south, the Arabs of North Africa and the Middle East, the Jews experience greatly intensified discrimination, persecution and violence after the end of the war, and especially after the European colonial powers withdrew from the area . This ended up with the number of Jews in the Arab world falling from approx. 1 million all the way down to less than 10,000 within the last 75 years. The Jewish communities in Egypt and Iraq – with 3,000-year-old roots – 75 years ago had a population of over 200,000 people. Today, there are less than 100 Jews left in Egypt and perhaps a handful of Jews left in Iraq …

The exodus of Jews from North Africa and the Middle East is the unknown dark story that spread far and wide long after Hitler’s gas furnaces were turned off. It was driven by the ideological alliance created between Nazi, Arab and Islamic leaders in the interwar years. The Alliance still fired new shots, even after 1945. SS personnel on the run from punishment in Europe settled in Egypt and were given positions as advisers in the Egyptian military. Bosnian Muslims who had fought on the side of the Nazis threw themselves into the war a few years later – the fight against the restored Jewish state. You can read more about this in the book that MIFF published in 2013, Crescent and Swastika (only available in Norwegian).

The ideological alliance continues today. Mein Kampf remains a bestseller in Arab countries. Most recently in the fall of 2013, video clips were posted on YouTube from the Jordanian capital Amman, where Hitler’s book and the conspiracy lies and forgery in Zion’s show protocols are open for sale in bookstores. Incitement to hatred against Jews and against Israel are main themes in TV series, which get a place in the best broadcast times, and thus large viewership.

From most countries around Europe, there are reports of new waves of anti-Semitic expressions and violent attacks that we have not seen before since World War II. In Norway, Sweden, and to a lesser extent in Denmark, we see the same trends.

In 2012, the results of a comprehensive study of Norwegian anti-Semitism – made by the Holocaust Center for the Government – were published. 12.5% ​​of the Norwegian population has “strong prejudices against Jews,” the researchers conclude. Just as many believe that the Jews themselves are to blame for their persecution.

As recently as January 2013, Jyllandsposten reported that Jewish children at a Danish school should stay away from certain areas, and that they were asked to change schools – and housing to avoid abuse from Arab students at the same school. This is just one of the examples that it is getting harder and harder to be a Jew in Europe.

In connection with Israel’s war against Hamas in the summer of 2014, there was a sharp increase in anti-Semitic demonstrations and incidents all over Europe – including Norway and Denmark.

In February 2015, a volunteer guard at the synagogue in Copenhagen was fatally shot by a young Dane from a Palestinian family. At all places where Jews gather, for example for prayer or education, it is necessary to have armed guards.

Note! Jew-hatred in Europe, especially since 2013, is growing in an old anti-Semitic and Christian anti-Jewish soil with new fertilizer, especially from the Middle East.

In large parts of the Muslim immigrant population in Europe, anti-Jewish attitudes are widespread. Muslim hatred and conspiracies are thoroughly fertilized and watered down by a tidal wave of anti-Jewish propaganda from the Arab satellite television stations, internet videos and mosques.

By not supporting Israel and Israel’s right to self-defense in such a situation, one exhibits a frightening contempt for Jewish life.

This article is the 6th in a series of articles: “Hwhy support Israel “which was published on Miff.no from and including 21 March 2014. Originally published in Norwegian on 13 April 2014. Additions for 2014-2015 examples by Dina Grossman, March 2018. In Danish by Inger Irene Hansen , February 2018. The article is based on a manuscript for the lecture: Why in the world support Israel? ( Norwegian – 1 hour – 13 November 2013 ) Conrad Myrland, general manager of MIFF .