Skip to content
Egypt The Jews in Muslim countries 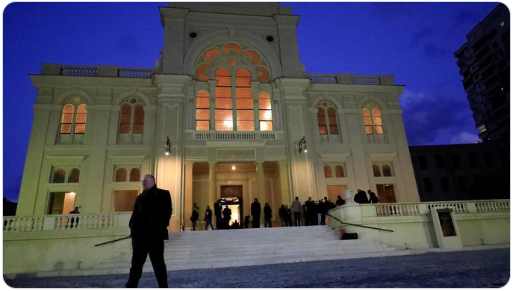 After a thorough restoration of the historic synagogue in Alexandria, it was reopened at an official ceremony – three Jews attended. There are eight Jews left in the country, writes the Jerusalem Post.

As part of Egypt’s program to preserve the Jewish heritage in the country, millions of euros have been spent on restoring the 14th-century Eliyahu Hanavi Synagogue [the Prophet Elijah].

-I am very proud of what my country has done because it symbolizes coexistence. Today, there is no difference between Muslims, Christians and Jews, says Magda Haroun, leader of Cairo’s small Jewish community.

Haroun has been fighting for years to preserve the Jewish heritage and she did not expect the Egyptian government would spend money on restoring the synagogue. Today there are two synagogues left in Alexandria.

In the 1940s, there was a sharp increase in violence against the country’s Jews. The state implemented laws that made it difficult to be a Jew. For example, restrictions were introduced on how many Jews there could be in the workplace and it became difficult to do business as a Jew. After the Arab countries attacked Israel in 1948 during the War of Independence, thousands of Egyptian Jews were detained and suspected of forming a fifth column against Egypt. Over the next ten years, over 70,000 Jews left Egypt. The Jews had been a part of society for several centuries, writes Dr. Shulamit Binah (former Israeli ambassador to Denmark) in Kristeligt Dagblad.

Today, there are only a handful of Jews left in the country’s once prosperous Jewish community. The eight remaining Jews are older – 67-year-old Haroun is the youngest.

“I will be the last Jewish woman in Egypt to close and turn off the synagogue,” Haroun said.

Yolande Mizrahi is over 80 years old, she also attended the reopening of the synagogue which she used to attend as a child with her father. Today, her family lives in France, Italy and Israel.

-I have traveled a lot but have always returned – this is my country and I belong here. Why should I travel? I hope my family will visit the country and see the synagogue, says Mizrahi.

-The Egyptian authorities hope that the synagogue will become a tourist attraction and thus support al-Sisi’s claim that the country respects religious minorities and their heritage , says Mizrahi.

-If it were not for [President Abdel Fattah] al-Sisi, the synagogue would not have been restored. Much has changed since he took power in the country, Mizrahi added to AFP.

In 2018, al-Sisi decided that the preservation of places of worship for Jews and Coptic Christians should be a priority.

-If the Jews return to Egypt, we will build synagogues for them, says President al-Sisi.

With eight elderly Jews left in the country, it is risk-free for al-Sisi to welcome the Jews back into the country – it is only a matter of time before there is not a single Jew left. By restoring the synagogue, the government can appear to be tolerant of minorities.

-It is a recognition of the Jews of Egypt who have been neglected for over sixty years. It is a recognition that we have always been here – we have contributed to Egyptian society on an equal footing with any other Egyptian, says Haroun.

Holocaust The Jews in Muslim countries

Feb 17, 2021
Arab countries Jews in the Gulf The Jews in Muslim countries

– Muslims and Jews in the Gulf can be an inspiring example