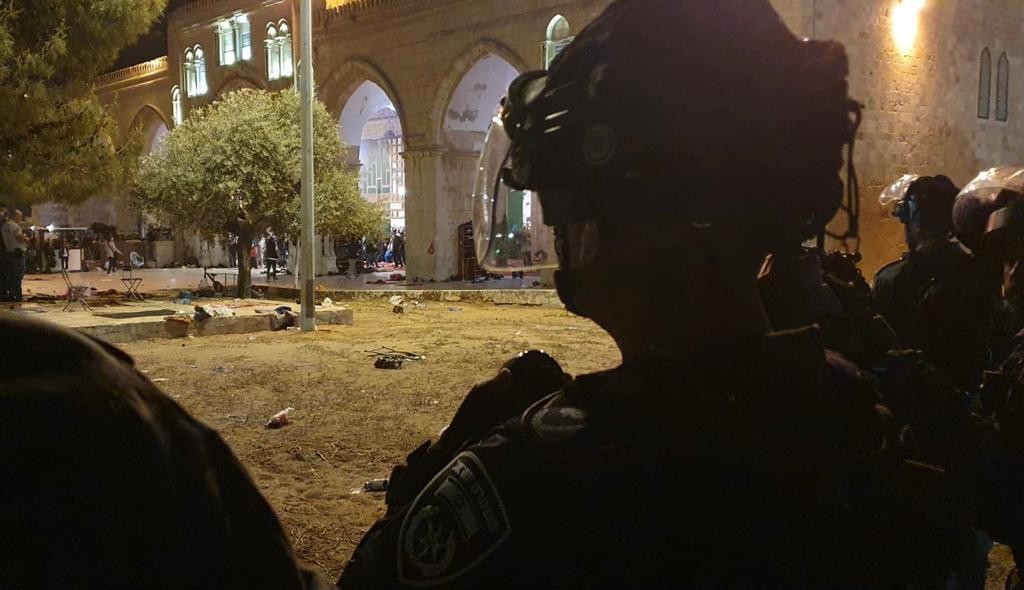 It has been a very troubled weekend in large parts of Israel – especially in Jerusalem. After the Muslims Friday prayer, large riots occur in the Temple Square, where the Al-AQSA mosque is located. Over 90,000 people were gathered for prayer and several of them used the occasion to throw stone and shoot with fireworks against Israeli safe forces on site.

It all developed into violent riots where Israeli police had to use tear gas and shock grenates. Hundreds of people were injured, including many Israeli police. Many were hit by stone’s throw.

During the riots of the Temple Square, a large crowd shouted “Bomb, Bomb Tel Aviv” and that was plotted with the terror of Hamas. It was also shouted camprot that Muhammad’s army will slaughter the Jews.

Hamas incitement is leading to violent protests on the Temple Mount.#Israel is committed to protecting all worshipers and restoring calm to #Jerusalem’s holy places. pic.twitter.com/UgWJ4uHJDC

Also Saturday and Sunday there were riots in the Temple Square. The riots have taken place in several parts of Jerusalem, among other things at the Damascus port at the entrance to Jerusalem’s old town. Other places in Israel, including in Haifa and Nazaret, Israeli Arabs gathered and demonstrated.

At the same time, there have been more rocketanbreg affry by terrorists in Gaza into South Israel Israel and more explosive balloon attacks that have caused many fires – read more here.

Monday, there have been reports that the violent riots in the Temple Square continue. It happens at the same time as Jerusalem’s day is marked in Israel. It is an Israeli holiday that marks the reunification of Jerusalem. Under normal circumstances, the day is marked with a large parade with Israeli flag, but due to the security situation in Israel’s capital, the parade will be canceled.

The excited situation has also meant that Israeli defense (IDF) has sent reinforcements to Judea and Samaria (West Bank). Friday, three Palestinian terrorists were stopped when they tried to penetrate Israel to kill Israelis – read here. Two of the terrorists were shot and killed during shooting exchange with Israeli security forces. A third terrorist ble hard injured and driven to a hospital in Israel.