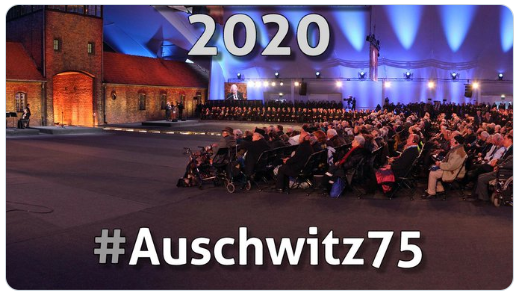 Over 2 million visitors passed through the Auschwitz-Birkenau death camp in 2019, the museum said on Tuesday in preparation for the 75th anniversary of the liberation of the death camp, writes the Times of Israel.

The Auschwitz leadership has appealed to celebrities such as Bill Gates and Leonardo DiCaprio to help them reach one million Twitter followers before the 75th anniversary of the liberation of the death camp on January 27, where about 200 Auschwitz survivors and delegations from several countries will gather in Auschwitz to commemorate the victims.

The 75th anniversary will also be marked at the Fifth World Holocaust Forum, where His Royal Highness Prince Charles, Prince of Wales will also attend his first official visit to Israel.

In 2019, German Chancellor Angela Merkel visited Auschwitz for the first time. With him, Chancellor Merkel had $ 66 million for Auschwitz-Birkenau.

Many of the buildings in the death camp were not built to last for a long time, which means that preserving the site is expensive. Preservation costs approx. 5 mio. dollars annually.

About 1.1 million people, including one million Jews from all over Europe, were killed by the Nazis in the death camp from 1940 to 1945.

Former Nazi guard in Stutthof concentration camp to court: -I regret my actions