Israeli TV: Hezbollah would use Beirut’s ammonium nitrate against Israel 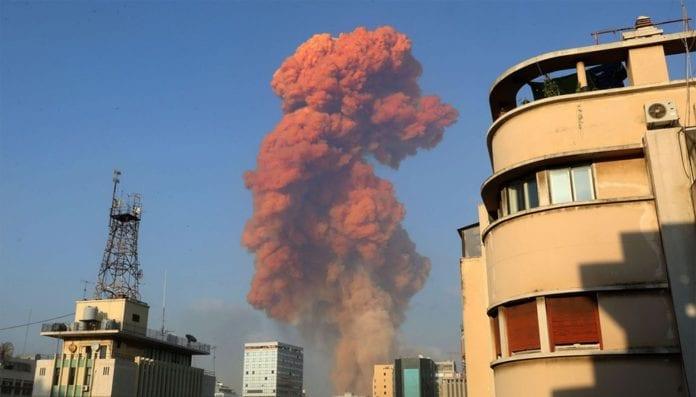 According to a security assessment obtained by the Israeli TV channel Channel 13, the Iranian-backed Lebanese terrorist organization Hezbollah planned to use ammonium nitrate which caused the huge explosion in Beirut against Israel in a “third Lebanon war”. Read MIFF’s articles about the explosion and Hezbollah here.

It is not known who is the source of the assessment, writes the newspaper Times of Israel.

The Israeli TV report was broadcast just hours after Hezbollah leader Hassan Nasrallah addressed the Lebanese people, categorically denying that his terrorist organization had stored weapons or explosives at the port of Beirut. More than 157 people lost their lives and thousands were injured after 2,750 tonnes of ammonium nitrate exploded in the Lebanese capital.

– I would categorically deny that there was anything that belonged to us at the port. No weapons, no rockets, no bombs, rifles, bullets or ammonium nitrate. We have not had a warehouse there, nothing. Not now and never before, Nasrallah said.

Israel has not formally claimed that Hezbollah is connected to the explosion.

In addition to use as a fertilizer, ammonium nitrate is also used to make explosives. It has caused several major accidents and was the main ingredient in a bomb that destroyed a federal building in Oklahoma in the United States in 1995. Last year, Israeli media wrote that the Israeli intelligence service Mossad had tipped several European countries that Hezbollah had stored ammonium nitrate for use in bombs in London, Cyprus and elsewhere in Europe.

Channel 13 pointed out that “the material that exploded in Beirut was nothing new to Nasrallah and Hezbollah”. In London in 2015, following tips from Mossad, three tons of ammonium nitrate belonging to Hezbollah were found hidden in flour sacks. A similar process led to a similar discovery in Germany. Hezbollah operatives had enough ammonium nitrate “to blow up an entire city,” according to German intelligence.

It was Nasrallah’s plans for Europe, but when it comes to ammonium nitrate at the port of Beirut, the assessment is that Nasrallah had plans to use it against Israel in a third Lebanon war, according to Channel 13.

At the same time, Moshe Ya’alon, Israel’s former defense minister and chief of defense, told a Saudi newspaper that Hezbollah was responsible for the explosion – read MIFF’s article on this. He says Hezbollah has known the ammonium nitrate for a long time and had control of the port. He says Israel has repeatedly warned Lebanon that Hezbollah has stored weapons and explosives in Beirut and elsewhere in the country.